Facility on target to open in April 2007.

Australia’s only synchrotron has achieved first light, a key milestone for the facility that is due to open in April next year. 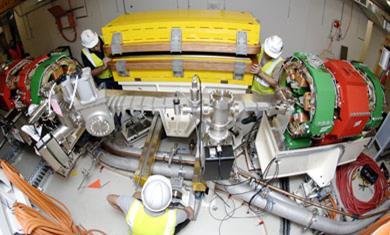 First light confirms that the synchrotron, housed at Monash University in Melbourne, Victoria, has achieved a sustained stream of electrons circling the storage ring at the full design energy of three billion electron volts. It was initially achieved using a fraction of the full current. Scientists are now working to strengthen the beam and get it under control.

’We have a dedicated team of experts who have constructed a superb machine in record time and on budget,’ said John Lenders, Victoria’s minister for major projects.

The next stage of the project is to build the beamlines that will harvest light from the electrons for scientific experiments. Nine beamlines have been identified as a priority - high-throughput protein crystallography, protein microcrystal and small molecule diffraction, powder diffraction, small and wide angle x-ray scattering, x-ray absorption, soft x-ray spectroscopy, infrared spectroscopy, microspectroscopy and imaging and medical therapy. Of these, five will be operational when the synchrotron opens next year, with the remaining four under construction. At full capacity it will be able to accommodate 30.

Victoria’s government funded the A$157.2 million construction project, while the beamlines are being funded by partners including state governments, universities and research organisations. Victoria’s minister for innovation, John Brumby, announced that funding for the nine beamlines has now reached A$50m - the largest amount raised through science collaboration in Australia. ’The project has forged the first ever national partnership to fund science infrastructure and once operational will play a major role in serving the needs of researchers across the nation,’ he said.

Brumby is also hopeful that the federal government will provide A$30m in match funding, as well as contributing to the operating costs.

Once the synchrotron is fully operational, it will be run by either the Commonwealth Scientific and Industrial Research Organisation (CSIRO, one of the funding partners), or a joint venture between the Australian Nuclear Science and Technology Organisation (another funding partner) and engineering company WorleyParsons. The operator is expected to be announced in September.

Rod Hill, group executive for information, manufacturing and minerals at CSIRO, says the organisation is planning to use the synchrotron for a number of projects including drug design, polymer paints and protective coatings. He said it will be much more efficient and cheaper than using overseas facilities. It will also benefit researchers who cannot use overseas synchrotrons because of the transit times for sensitive samples or quarantine restrictions.