The Austria government, hoping to transform its fledgling Institute of Science and Technology (IST) into one of the world’s top interdisciplinary research centres, has given preliminary approval for an injection of nearly €1 billion (?840 million) in federal funding through to 2026.

The IST, which is based in Klosterneuburg, opened its doors in summer 2009. Current research focuses on evolutionary biology, cell biology and biophysics, neuroscience and computer science, but the new funding will allow it to expand into chemistry, physics and mathematics.

Laurenz Niel, head of academic affairs at the IST, says that none of the current 20 group leaders is a chemist, but that some the group’s research ’interfaces to chemistry’, especially biochemistry and computational chemistry. 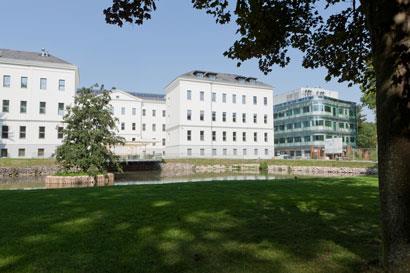 ’Chemistry is one of the focus areas for our further expansion,’ he says. ’The third lab building, which is now in the planning stage, shall be dedicated to chemistry, physics and materials science.’ In coming years the institute will be recruiting ’scientists of the highest standards and, therefore, we won’t exclude any sub-discipline of chemistry’.

In May 2011, a six-member panel of international scientists evaluating the institute issued a report rating its development thus far as excellent, saying ’over a period of about two years IST managed to identify and attract an amazing group of almost 20 faculty members that would be the pride of any top university in the world’.

Erwin Neher, a member of that panel and a director of membrane biophysics at the Max Planck Institute for Biophysical Chemistry in G?ttingen, Germany, tells Chemistry World that the IST’s progress in such a short time has been ’really spectacular’. Neher won the 1991 medicine Nobel prize and says that ’the principles on which IST is working reflect the rich experience and wisdom of those who formulated them’.

The founding principles were put together by a prestigious committee comprising Haim Harari, president of the Weizmann Institute in Rehovot, Israel; Olaf K?bler, president of the Swiss Federal Institute of Technology (ETH) in Zurich; and Hubert Markl, former president of the German Research Foundation and the Max Planck Society. Neher says that IST’s mission statement ’reads like a wish-list for any basic scientist’.

Not everyone in Austria is so happy with IST’s funding bonanza, however. The Austrian Academy of Sciences (AAS), which is allocated €85 million in federal funds each year for its 65 institutes, issued a critical press release. The AAS says the funding package is ’a completely unjustified preference for IST Austria’ that will hinder the goal of strengthening science and research at Austrian universities, some of which already are struggling under budget savings measures.

The new funding compares favourably with the institute’s total basic funding of €190 million from 2007 through 2016, according to Niel, adding that any third-party funds up to €95 million the institute raises will be matched by the state. Thus far, the institute has raised €37 million in third party funds, including grants awarded to eight of its 20 professors from the European Research Council.