Back in time for CW reporter

The dramatic rescue of Robert Hooke’s long-lost notes on the meetings of the Royal Society from 1661 to 1682 culminated on 17 May in the return of the papers to the society’s president, Lord Rees of Ludlow. The handover was conducted by English polymath Robert Hooke himself, dressed in seventeenth-century fashion complete with frock coat and periwig. Or rather, by an impersonator who, I confess, was me. 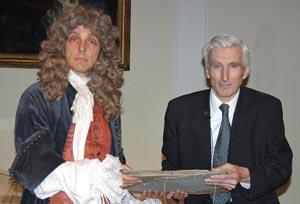 Hooke’s folio, discovered in a cupboard in Hampshire, UK, consists of around 500 pages of minutes taken at the Royal Society, the UK national academy of science, transcribed by the man himself for personal use - and therefore annotated with asides that reveal his disputes with other scientists such as Isaac Newton and Henry Oldenburg - ’the dog’, as Hooke calls him at one point. They are an ’absolute treasure trove of new information about the day-to-day activities of the early scientific establishment’, according to historian and Hooke biographer Lisa Jardine, who is itching to study them in detail.

The papers were saved from auction - which would have probably seen them sold overseas - at the last minute in late March, when the Royal Society reached a private deal thanks to nearly ?1 million given by the Wellcome Trust and 150 other donors.

I can’t say that I would recommend Restoration costume in summertime, but it was worth the discomfort for the half-hour I had alone with the papers before the ceremony. I fear that I didn’t discover any exclusive revelations - Hooke’s writing is tiny and hard to read, and anyway I was struggling to stop my stockings from slipping down - but I enjoyed a remark that a letter from Antoni van Leeuwenhoek (whose work on the microscope left the ambitious Hooke rather prickly) had been received but was deferred until the next meeting because ’it is in Low Dutch and very long.’