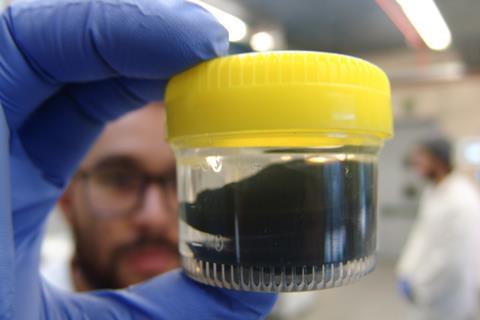 Bacteria can grow cellulose films for generating electricity from waste heat when they’re cultured in media containing carbon nanotubes, new research shows. Mariano Campoy-Quiles of the Institute of Materials Science of Barcelona, Spain, who led the work, describes it as a shift from manufacturing materials to farming them. ‘The fact that bacteria make the film, and not a scientist, is utterly remarkable … This work might be a humble first step into the world of do-it-yourself advanced energy materials,’ he adds.

Thermoelectric materials typically consist of inorganic semiconductors and semimetals. Now, Campoy-Quiles’s team has made thermoelectric paper from bacterial cellulose embedded with carbon nanotubes. By using a biodegradable matrix from which the nanotubes can be recovered, the team has introduced the prospect of recycling it, and also eliminated the need for scarce and expensive materials.

The material’s functionality relies on the thermoelectric effect. A difference in temperature across the material causes electrons to transfer from the hot side to the cold, resulting an in electric current. The material could therefore be used anywhere there is a temperature gradient.

(a) Carbon nanotubes are homogeneously dispersed in the culture medium. (b) Scheme of the preparation steps. (c) Dyed composites, each 2 cm in diameter. Large film with a diameter of 11 cm in water, (d) before, and (e) after washing. The insulating top side has a blueish hue. (f) Wet and (g and h) dried film. Final film thickness is about 10μm after 5 days of incubation

Scientists have embedded carbon nanomaterials in polymers before, but previously had problems relating to the thermal conductivity of the polymers. Bacterial cellulose, in addition to being thermally stable, has low thermal conductivity; it’s also flexible so will wrap around heat sources to ensure good thermal coupling between the two.

Xavier Crispin, who researches organic electronics at Linköping University in Sweden, cautions that the cellulose will degrade and potentially carbonise at high temperatures. ‘This might affect the electrical conductivity of the composite. Cellulose is a good template for a low temperature range, but carbon nanotubes are interesting for higher temperature applications. The next move would be to find cheap nanofibers that align the carbon nanotubes, but resist high temperature.’