Downstream purification of bio-based glutaric acid and polymerisation into nylon-6,5

Researchers in Germany have metabolically engineered a bacterium to produce glutaric acid in significant quantities. It does so without secreting any byproducts – a common limitation of bio-based syntheses – and could be a sustainable replacement for the petrochemical routes currently used to synthesise the commodity chemical.

Every day you likely encounter numerous things made using the five-carbon organic compound glutaric acid. It’s a building block for commercial polyesters and polyamides, and is used to make the common plasticiser 1,5-pentanediol. It’s even present as a flavouring in food and alcoholic drinks, and has been tested in materials for making heart valve replacements and military body armour. 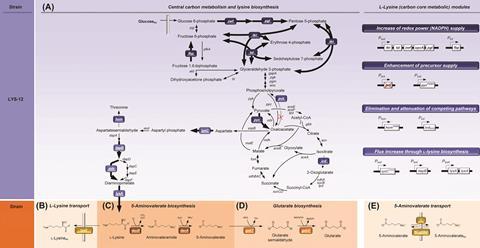 Metabolic pathway design for the production of glutarate in Corynebacterium glutamicum

They engineered the microbes to overproduce the amino acid L-lysine. The bacteria then convert L-lysine to glutaric acid via a 5-aminovalerate intermediate. Wittmann’s team also engineered the bacteria to overexpress an importer protein that re-uptakes 5-aminovalerate into the bacterial cell, enabling almost exclusive glutaric acid production. Accumulation of the 5-aminovalerate intermediate had hampered previous work, which generated a mixture of products rather than pure glutaric acid. ‘The researchers achieve really remarkable outputs,’ highlights David Nielsen, a sustainability and metabolic engineering expert at Arizona State University, US. ‘At the demonstrated output, their strains appear ready to take the next step towards commercialisation.’

The team also showed that their bacterially-produced glutaric acid, along with a six-carbon monomer, could be used to make nylon-6,5 and showed that it has the same structural and thermal properties as petrochemically produced nylon. By substituting the six-carbon monomer with other biologically produced diamine monomers, glutaric acid can be used to synthesise other polyamides. ‘This would enable 100% biorenewable nylons with tunable properties for a diversity of applications,’ comments Nielsen.

What’s more, the bacteria can also feed on renewable resources such as lignocellulosic biomass and mannitol extracted from seaweed.