Researchers have identified a bacterial gene that is needed for the production of dimethyl sulfide (DMS), the climate-cooling gas responsible for the distinctive smell of the seaside. The discovery challenges the current hypothesis for the mechanism involved in the synthesis of DMS.

The precursor to DMS, dimethylsulfoniopropionate (DMSP), is a secondary metabolite produced by marine phytoplankton. Ocean bacteria process this molecule and convert it into either sulfur compounds that enter the marine food web or into DMS, a gas that has a major effect on global climate by stimulating the formation of clouds that reflect sunlight back to space. Since the ocean emits tens of millions of tons of DMS every year, it’s important to understand exactly where it comes from.

Previously, scientists thought that the bacteria used a lyase enzyme to liberate DMS from DMSP directly. But now, Andrew Johnston and colleagues from the University of East Anglia, Norwich, UK, have challenged this view. 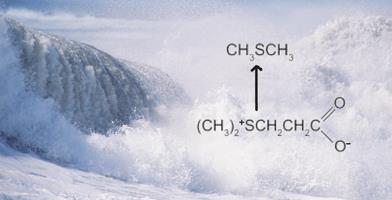 Dimethyl sulfide (above) is generated by bacterial catabolism of dimethylsulfoniopropionate (below), a secondary metabolite of marine algae

The researchers report in this week’s issue of Science1 that the initial step in the release of DMS actually involves the modification of DMSP. They identify a gene, dddD, from the marine bacterium Marinomonas, that adds acyl coenzyme A to DMSP before it is broken apart. Coenzymes help to ferry molecules into place so that enzymes can work on them.

’By isolating a single gene from a bacterium collected from the mud of Stiffkey marshes, we deduced that the mechanisms involved in DMS production differ markedly from those that had been predicted,’ said Johnston.

Identifying the gene meant that Johnston’s team could search for the same ability in other bacteria. They found that dddD also occurs in the Sargasso Sea metagenome, which is thought to represent at least 1800 bacterial species from the North Atlantic.

In related work, Mary Ann Moran, a marine microbiologist at the University of Georgia in Athens, US, and a team of American and Spanish researchers recently reported the identification of a gene, dmdA, which stopped ocean bacteria producing DMS. The gene - present in one-third of the bacteria found at the surface of the oceans - demethylates DMSP so that instead of creating DMS, the bugs generate other sulfur compounds which reroute into the marine microbial food web2.

’We knew bacteria played a key role in the cycling of marine sulfur but the discovery of this gene allows us to pinpoint how and when bacteria control this process,’ said Moran.

Now that these genes have been discovered, learning more about what triggers their expression and identifying more bacteria that possess one or both of these genes will be the next step.
’Both of these studies give us an elegant way to get at the regulation of these genes,’ Moran told  Chemistry World.