Bacterial growth is inhibited by broccoli 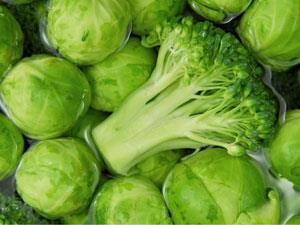 Chemists from Israel say that the isothiocyanates sulforaphane and erucin, found in brassicaceae vegetables such as broccoli, Brussels sprouts, cabbage and cauliflower, inhibit growth of the disease-causing bacteria Pseudomonas aeruginosa.

Bacterial quorum sensing (QS) is the method by which bacteria communicate. Instead of language, they release signalling molecules into the environment and a single cell can sense the number of other local bacteria. By using QS, bacteria can coordinate their behaviour through gene expression and adapt to changing environmental conditions. With bacteria such as MRSA and Pseudomonas aeruginosa developing antibiotic resistance, alternative strategies to inhibit bacterial growth are necessary and QS inhibition has been suggested as a new strategy to prevent bacterial growth.

The team, led by Michael Meijler from Ben-Gurion University of the Negev, Be’er-Sheva, found that isothiocyanates from broccoli inhibit quorum sensing. ‘This might signal to the bacteria that conditions for colonisation are not optimal,’ he explains. ‘The benefits of eating vegetables to human health in general have been known for quite some time now. At the molecular level, not a great deal is known yet, providing a fertile ground for fundamental research.’

The work by Meijler supports research from the group of Michael Givskov and co-workers at the University of Copenhagen, Denmark. ‘They made several important discoveries in the area of quorum sensing and discovered that similar isothiocyanates (from horseradish) also inhibit quorum sensing in Pseudomonas aeruginosa,’ explains Meijler.

‘[Meijler’s] work largely confirms the data from the Givskov lab and both groups offer a development within the field as a whole,’ says Paul Williams, professor of molecular microbiology at the University of Nottingham, UK. ‘Clearly there is a lot of interest in potential therapeutic agents which attenuate virulence rather than kill the infecting organism and quorum sensing has emerged as a “popular” potential target. Ajoene [an unsaturated disulfide] from garlic is another interesting QS inhibitor lead.’

However, further research and testing is required. ‘As interesting as our findings are, they do not prove that these isothiocyanates have this activity in vivo. So that would be an obvious avenue to study further,’ says Meijler.