Bismuth–antibody nanoparticles to target bacteria deep in a wound

Scientists in the US and China have come up with a low-risk treatment for bacterial infections in a deep wound.

Treating infections has long been a challenge for healthcare professionals, and infections caused by drug resistant bacteria have made this task even more difficult to manage. Recently, the genome of an MRSA (methicillin-resistant Staphylococcus aureus) outbreak in a hospital was sequenced to identify the source of infection, track its spread and avoid an outbreak.1 Such extreme measures of tracing infection need an equally tough bactericide. X-ray irradiation is known to have bactericidal properties; however, the high doses needed and the associated risks have restricted its use in vivo.

Now, Ming Su and his teams at the University of Central Florida, US, and the Third Military Medical University, China, have discovered a low-risk solution using antibody-modified bismuth nanoparticles that, in combination with an x-ray dose equivalent to a chest x-ray, specifically kill the common bacterium Pseudomonas aeruginosa in a set-up designed to resemble a deep wound in human tissue.2 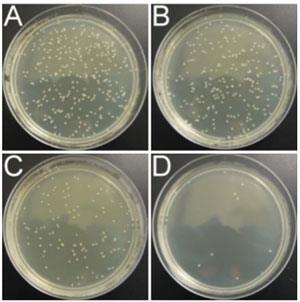 Toby Jenkins of the department of chemistry, University of Bath, UK, thinks that ‘using the antibody-modified nanoparticles to conjugate to the bacteria is a very interesting concept from a biochemical perspective’. However, he says that using x-rays and nanoparticles in a clinical treatment have ‘associated risks and would need to be carefully considered’.

The success of the method comes from the radiosensitisation effect of bismuth; its cross-sectional absorption of x-rays is much higher than other heavy metals, such as gold, meaning the local dose of radiation is enhanced up to 35 times. Conjugation between the antibody and the bacteria decreases the distance between the bismuth nanoparticles and the bacteria, further enhancing the efficacy. Su says that ‘deep wound disinfection is challenging for many existing methods because it is difficult to access the bacteria and infection often reoccurs. Using penetrating x-ray radiation-absorbing nanoparticles for deep wound disinfection provides obvious benefits.’ He adds that the team believes that ‘the method could be more efficient than other disinfection methods, such as taking antibiotics’.