Over-simplifying chemical processes occurring in batteries has obscured an opportunity to improve energy efficiency, according to Slovenian and German scientists. Models for any similar interconnected storage particles - including balloons filled from the same source - are equally affected, they say.

’People assume that a common pressure vessel will fill balloons attached to it simultaneously explains Miran Gaberscek. Gaberscek, head of the materials electrochemistry lab at Slovenia’s National Institute of Chemistry, notes that researchers view battery storage materials similarly. Individual battery particles have been shown to fill with ions gradually, but Gaberscek and his team now say that groups of particles can exchange their contents. This leads to some unexpected filling phenomena. ’In a battery there are billions of particles,’ says Gaberscek. ’This makes a huge difference.’

Gaberscek’s idea of interconnected particles was inspired by the gap between batteries’ charging and discharging voltages at zero current. At this point, the battery should be in equilibrium, but the voltage gap indicates that it isn’t. To investigate why, Gaberscek’s student Joze Moskon slowly charged and discharged LiFePO4 battery materials. When left to rest for two days, their voltages changed, suggesting a previously ignored process.

The Slovenian group then teamed up with Germany’s Weierstrass Institute for Applied Analysis and Stochastics to construct theoretical models from thermodynamic energy profiles for charging battery materials. ’When filling these particles we need to overcome an inherent energy barrier,’ Gaberscek says. The barrier to lithium ions entering a storage material is like a balloon’s elastic resistance to its first inflations, he explained. 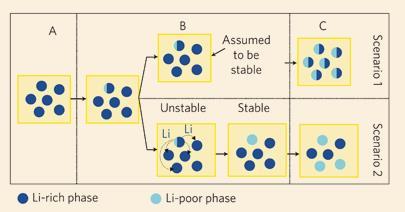 Until recently scientists assumed that lithium ions steadily and simultaneously filled storage particles (scenario 1). Now researchers say that Li exchange between particles is likely to result in individual particles filling separately one after another (scenario 2), with the movement causing energy loss.

They found that one balloon or particle crossing the barrier and filling completely takes less energy than partially filling whole groups. Consequently particles charge individually one after another, rather than simultaneously. ’This is possible because one particle can take charge from all the others,’ Gaberscek explained. ’You lose energy from this movement of lithium content.’ Avoiding this exchange, he says, would need storage materials without an energy barrier. ’You have to invent battery particles with a homogeneous potential profile,’ says Gaberscek.

’This underlines that we don’t understand what’s going on in a lithium ion battery in detail,’ said Marnix Wagemaker, a battery researcher at Delft University of Technology, The Netherlands. He emphasises that the voltage gap - at about 5mV in a 3V battery - isn’t especially problematic, but notes that understanding its origin will be important.