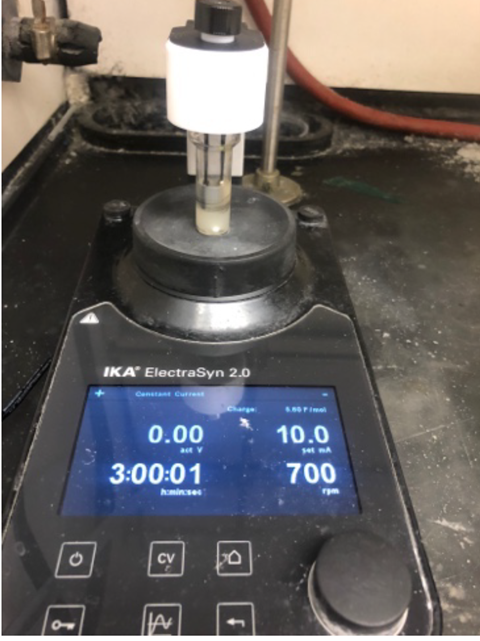 The best answer yet has been given to a question that has troubled organic chemists for decades: is there a good way to make hindered ethers? Phil Baran at the Scripps Research Institute in La Jolla has been asked that question repeatedly over the past decade by organisations he’s been consulting for.

‘It was clear that these are difficult to make and that the state-of-the-art is still century-old chemistry,’ Baran tells Chemistry World. His team therefore joined with his Scripps colleague Donna Blackmond’s group to bring the route up to date. ‘The ongoing interest our labs have in electrochemistry seemed like a natural fit to solve this problem,’ Baran says.

In a preprint that is currently under peer review, the teams produce more than 80 ethers that they say would otherwise have been ‘extremely difficult to access’. Among them, they used their method to break open ‘synthetic bottlenecks’ for 12 commercially important molecules, including potential cancer and HIV drugs. For these molecules they reduced the average number of synthetic steps from 6.3 to 1.5 and shortened average reaction times from around 100 hours to less than 10. They also increased the yield of the final products they made from 19% of the theoretical maximum to 43%.

Blackmond and Baran’s teams started from the Hofer–Moest reaction, published in 1902, which passes high current through solutions to break carboxylic acids down into carbon dioxide and highly-reactive carbocations. The Hofer–Moest reaction uses alcohols as solvents under mildly alkaline conditions, deprotonating the alcohols that react with the carbocations to produce ethers. However, chemists can only afford to use simple alcohols in this way. Baran stresses that the high currents are also inefficient and the platinum electrodes needed are expensive.

Over the course of around 1000 experiments the scientists explored various alternative solvents, bases and electrolyte additives, and switched to cheaper carbon electrodes. Selecting dichloromethane as the solvent enabled a big jump in yield, while 2,4,6-collidine proved to be the best base and tetrabutylammonium hexafluorophosphate the best electrolyte.

Adding silver hexafluorophosphate and molecular sieves could improve yields even further when using a threefold excess of ‘complex and valuable’ hindered alcohols. Baran stresses that the excess can be recovered. ‘Most importantly, the scope of the Hofer–Moest reaction has never been shown to include hindered alcohol nucleophiles so the potential here was completely unrecognised,’ he adds.

The paper’s co-authors include scientists at multinational drug giants Pfizer and Bristol Myers-Squibb, with Baran revealing that Bristol Myers-Squibb is already adopting the reaction ‘for a problem in process chemistry’. ‘I suspect this will be a method that might force some folks to at least consider trying electrochemistry if they are faced with making such structures,’ he adds.

The Scripps researchers also used nucleophiles other than alcohols, leading to hindered alcohols and alkyl fluorides. And they are now exploring what else can be done to simplify synthesis with these easily accessible carbocations. ‘That is always the goal – unusual redox techniques only have value when they get you someplace quickly that would be otherwise difficult,’ Baran says.

Kevin Lam from the University of Greenwich calls the study ‘fantastic’, using conditions ‘far from the ones that are recommended in organic electrochemistry textbooks’. He notes that the method is easily scalable, and forecasts that it ‘will be widely used, especially by the pharmaceutical industry’.

Baran stresses that the approach won’t completely eliminate older ether production methods, like the classic Williamson ether synthesis. ‘For making simple ethers, the old Williamson will be here to stay,’ he says. ‘For hindered systems, however, this may be the only viable option, unless one enjoys long sequences with low yields.’