While other chemical companies are trying to reduce their exposure to the automotive industry, BASF is heading in the other direction

While other chemical companies are trying to reduce their exposure to the automotive industry, BASF is heading in the other direction. Speaking at a press event in London, UK, on Wednesday, chair Kurt Bock said that demand for cars in emerging markets and a trend towards more chemical products in those cars would ensure that BASF investments in this area pay off. 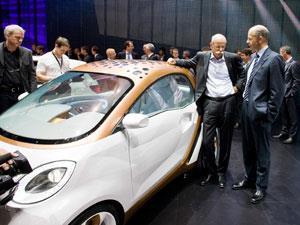 The auto industry was badly hit by the 2008 global economic collapse. Car buying in developed countries slumped dramatically, and this affected the chemical companies that supplied paints, catalysts and components. Since then, several have moved to distance themselves. Indeed, earlier this month, DuPont struck a deal to sell its auto paints business for $4.9 billion (£3.1 billion) to a private investment group.

But BASF has other ideas. ‘It is a demanding industry, there’s no doubt about that,’ Bock said. ‘At the same time, auto companies have to rely on the expertise and R&D efforts of their suppliers. We can build a business that grows nicely and is profitable.’

Automotive is the largest of the so-called customer businesses at BASF, representing $9.5 billion in sales. This makes BASF the largest supplier of chemical products to the auto industry and the 12th largest supplier of any kind. And demand for cars is growing in emerging markets, Bock said. By 2012, there will be 1.2 billion cars on the world’s road, compared with 900 million in 2011.

Meanwhile, the chemical content of those cars is increasing. Car makers are interested in reducing weight so that they go further on the same amount of fuel. BASF says that the average car could become 150kg lighter in the next 10-15 years. Car makers are also looking for better catalysts for cleaning up exhaust emissions.

Furthermore, the company has made a lot of investment in battery technology recently, hoping to benefit from a trend towards electric vehicles. It bought Ovonic, Novolyte and the electrolyte business of Merck KGaA. It also bought a stake in Sion Power. The company says it is looking to make sales of $500 million in this area by 2020, with research focusing on development of the cathode material, rather than the anode.

When Bock took questions from the floor about chemicals derived from renewable materials, so-called bio-based chemicals, he said that in most cases they were neither economically viable nor sustainable. Sugar cane in Brazil can work, he added. But bio-ethanol production in Europe and the US is not a good idea.

‘With the degree of efficiency that we have obtained, there is no better use for oil or natural gas than making chemicals,’ Bock said. ‘Burning the stuff in a car? The efficiency you get is 40% maybe, the rest is heat and exhaust – we use every single drop.’