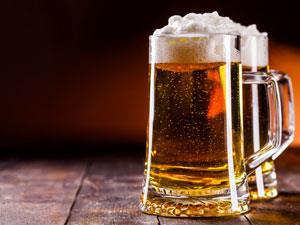 Why is there arsenic in your beer?

The Germans take the purity of their beer seriously. Back in the 16th century the Reinheitsgebot, or beer purity law, specified that the only ingredients that could be used in beer were water, barley and hops. Once it was realised that yeast was involved in the brewing process that was allowed as well. Today, the Provisional German Beer Law allows slightly different components but it certainly doesn't specify that arsenic can be added to the beer. Mehmet Coelhan of the Weihenstephan research centre at the Technical University of Munich, Germany, however, has found that that is exactly what brewers might unwittingly be doing. He suggests that the material used to filter beers might add arsenic at the same time as it removes yeast.

A 2008 paper found high levels of arsenic in Italian beer - up to two and a half times the legal limit of 10µg/l in the US and Europe - but they didn't investigate where that might have come from, explains Coelhan. The Weihenstephan research centre, which focuses on beer related research and carries out a lot of analysis for the brewing industry, analysed nearly 360 samples of beer for heavy metals. They found that some had levels over that 10µg/l threshold. And, added Coelhan, 'there is almost always arsenic in beer'.

The puzzle was that when the team analysed the water, malt and hops used, they couldn't make the amount of arsenic in those ingredients add up to the level of arsenic in the beers. The answer, says Coelhan at the 245th ACS National Meeting & Exposition in New Orleans, US, lies in the material used to filter the beers after fermentation, kieselguhr.

Coelhan's team found that there could be large amounts of what Coelhan calls 'extractable arsenic' in the substance, which is a diatomaceous rock made from fossilised algae. Kieselguhr is mined in various countries, mainly the US, France and China, and once powdered is used by brewers to remove yeast and sediment from beer. Some of the kieselguhr that Coelhan analysed released arsenic at up to 12µg/l, but Coelhan adds that there are no regulations on acceptable levels of arsenic in beer.

Janet Hock from the Centre for Urban Health at Indiana University, US, who is discussing arsenic exposure at the meeting, explains that at the moment it isn't clear what level of arsenic is acceptable. 'The concern is how much of a health risk is added via arsenic coming in through food (or beer) - does it push it to a higher risk level than we can accept?' she adds. The other variable is of course that we don't drink beer constantly in the same way we're always consuming water. That says Hock, further complicates trying to quantify the health risks. 'Is the gap between arsenic "loading" long enough to allow recovery and reversal of whatever pathways have been activated?' she says. 'I find very little literature on the resilience of humans to arsenic, let alone intermittent arsenic intake.'

However, as well as switching to a different filtration method, explains Coelhan, brewers could switch to using kieselguhr with low levels of arsenic or to treat the material to remove the arsenic before use. If beer can remove arsenic so could other solvents, perhaps even water. For this research the team in Munich only received kieselguhr samples from breweries, not from keiselguhr suppliers. More analysis is needed to quantify the different commercially available sources.