US researchers have developed a new way of hijacking microbe metabolism to produce long-chain alcohol fuels which are better petrol substitutes than ethanol.

Jim Liao and colleagues from the University of California, Los Angeles, re-engineered the Escherichia coli bacterium to force it to produce isobutanol and a variety of other promising long-chain alcohol fuels.

Butanol and branched-chain related alcohols with four or five carbon atoms are far superior to ethanol as petrol substitutes. They store more energy per litre (though still not as much as petrol); they suck up less water from the atmosphere, so are less prone to contamination; and they are less corrosive to pipelines than ethanol.

Since 1916, it’s been known that microbes such as Clostridium acetobutylicum can ferment sugar to produce butanol and ethanol, but the process can’t compete with cheaper techniques based on petroleum distillation. Now, as the price of oil increases, bugs are back in favour, yet butanol fermentation is still not economically viable.

Liao’s team decided not to improve the traditional fermentation pathway, because it only makes straight-chain 1-butanol. Their target, branched-chain isobutanol, has a higher octane rating than straight-chain butanol, and should reduce engine ’knocking’.

Straight-chain butanol synthesis is also hard to transfer to other organisms, and would require adding many foreign designer enzymes. Instead, the team introduced genes expressing foreign enzymes that diverted excess 2-keto acids, intermediates in amino acid synthesis, to alcohols.

The process created a variety of alcohols with three, four or five carbon atoms in their chains, including high yields of isobutanol, with good specificity. And relying on an amino acid biosynthesis pathway means that the strategy should be easily adaptable to other microorganisms, since E. Coli itself is not well suited to industrial-scale production.

’This strategy opens the door to explore different higher alcohols as biofuels, not just ethanol and 1-butanol. And because of its readiness for transferring to other organisms, it can be implemented in organisms that [unlike E. coli] degrade cellulose or fix CO2,’ Liao told Chemistry World. 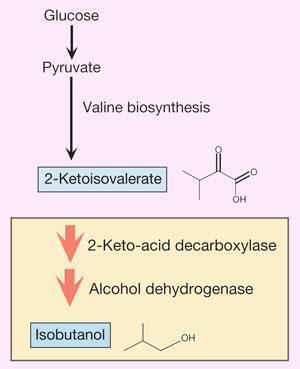 Higher alcohols were made by diverting 2-keto acid intermediates, made during E. coli’s biosynthesis of amino acids. Here, the valine biosynthesis pathway is hijacked by non-native enzymes to produce isobutanol

Since butanol poisons the microbes that produce it, a key barrier to commercial biobutanol synthesis is improving microbe tolerance. But Liao, who coordinates his efforts with Pasadena-based biofuels company Gevo, told Chemistry World  that ’the barriers are in technical process design, and we should be in the initial stages of commercial scale biobutanol production in two to three years’.

Gevo’s immediate competition may come from Oxfordshire-based biotech company Green Biologics. Its CEO, Edward Green, told Chemistry World  that his company had developed its own thermophilic bacteria which could chew up hemicellulose to produce high yields of butanol, and could tolerate close to 4 per cent butanol concentration - twice the resistance seen in both traditional fermentation and Liao’s process. ’We are looking for commercial production in 18 months,’ said Green.