Molecules that can self-assemble into unique nano-sized structures - such as ribbons resembling microscopic twists of pasta - have been made by Chinese scientists. The ribbons also contain fluorescent and semiconducting units, so could be used in new optoelectronic materials.

The compounds were made by attaching bile acid groups to opposite ends of a conjugated molecule. Bile acids are large chiral molecules that occur naturally in the liver as breakdown products of cholesterol. Importantly, they are also facial amphiphiles - meaning they have hydrophilic and hydrophobic groups located on opposite faces.

This combination of chiral and amphiphilic properties is key to the unusual self-assembly, says Guangtao Li, who worked on the project at Tsinghua University in Beijing, China. When  added to a suitable solvent system, such as a mixture of tetrahydrofuran(THF) and water, the bile acid groups direct the molecules to self-assemble into complicated structures, including short bundles, long pasta-like twists, crystalline rods or sealed capsules. 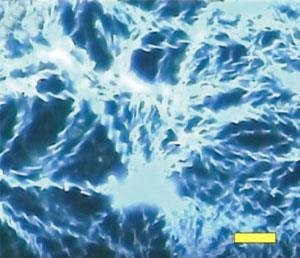 Interestingly, small changes in the bile acids dramatically affect the shape of the resulting nano-structures. For example, switching from cholic acid to deoxycholic acid - a change of just two hydroxyl groups - causes a completely different structure to form. Cholic acid produces capsules around 100nm in size, whereas deoxycholic acid forms  long ribbons only a few micrometers wide, but hundreds of micrometers long.

’Bile acids are strikingly diverse in nature and we can also alter the structure of the pendant groups and the polarity of solvents,’ Li told Chemistry World. ’This opens up a new opportunity to create a variety of fascinating morphologies for the development of advanced materials.’ 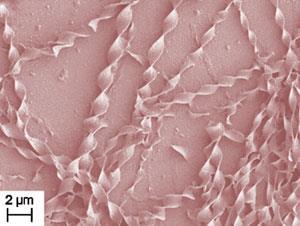 Some of the twisted ribbon nano-structures the team observed. These ribbons are approximately 1.5?m wide and a few hundred micrometers in length

By tweaking the ingredients, the team hope that they will not only be able to find some interesting optoelectronics, but also possibly design nano-sized solenoids or capsules for drug delivery.

’Several research groups around the world are trying to develop useful materials out of bile acids by taking advantage of their unique structure, availability, and biocompatibility,’ says Yan Zhao, an expert on  supramolecular chemistry at Iowa State University, US.

’This work is a remarkable example of how structural information in a small molecule building block can manifest on a much larger scale,’ he adds. ’With the fluorescent, semiconducting units in the interiors, these structures may be very useful.’