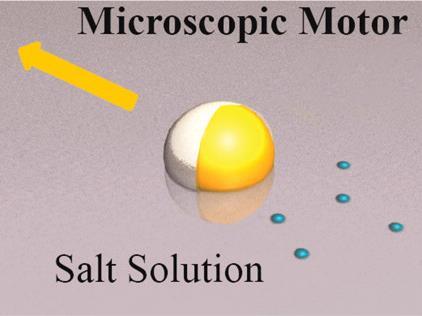 The micro-motor powers itself using depolymerisation, firing out formaldehyde and cyanoacrylate to push itself along

Scientists in the US have created a micro-motor that carries its own bio-friendly fuel to propel itself across the surface of water. And unlike other nano-engines it relies on a rather unusual mechanism to drive itself: depolymerisation.

There are various ways of powering micro-motors that use the motor’s surroundings as fuel, such as releasing peptides or producing bubbles in hydrogen peroxide and seawater. However, the potential biological applications of these autonomous swimming devices can only be realised if both the motor and its products are non-toxic, and if the mechanism works at physiological pH.

Now, Ayusman Sen and his team at Pennsylvania State University have produced a biocompatible micro-motor with an onboard fuel source: poly(2-ethyl cyanoacrylate). To create his micro-motor Sen impregnated anion-exchange resin beads with the polymer. ‘If you put one of these into a salt solution, ionic exchange releases hydroxide ions, causing a depolymerisation reaction,’ explains Sen. This depolymerisation releases small, non-toxic molecules that lower the surface tension on one side of the motor, moving it away from its ‘organic exhaust’ towards the area of higher surface tension. To make sure the motor didn’t just spin in a circle the team also covered one side of it with an impermeable coating to ensure ions were only emitted from one end.

‘Scientists are now chasing the holy grail of motors for which the propulsion is generated by biocompatible fuels,’ says Alexander Kuhn at the University of Bordeaux, France. But, adds Steve Ebbens, an expert in nano-swimming devices from the University of Sheffield, UK, ‘many existing propulsion schemes do not pass this test, as they rely on phenomenon only present at low ionic strengths, or high surfactant concentrations’.

Ebbens goes on to say: ‘[This work is] a step closer to the goal of autonomous devices that can perform useful functions within the body.’ Kuhn agrees; however, he questions ‘whether the release of certain reaction products, namely formaldehyde and cyanoacrylate, are really harmless in biological systems’.

Sen suggests that drugs could be packed into the motor or attached to the polymer to create drug delivery systems. As Sen and his team continue to look into targeted treatments, their next challenge is to find out if these micro-motors can move when submerged and if they can go against the flow. Sen also hints at using the micro-motors to clean up oil spills, but adds that this idea is ‘somewhat far-fetched’.