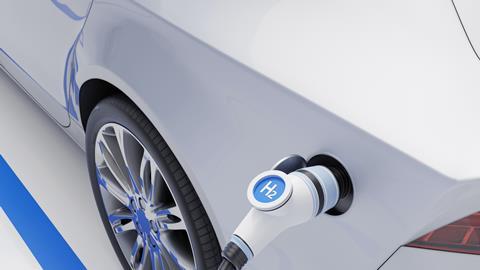 Hydrogen has great potential as a green fuel, but several issues need to be ironed out before widespread rollout can happen. A compact hydrogen production plant developed by the Technical University (TU) of Graz and industry partners could be the answer to some of these problems.

The plant uses a chemical looping method to extract hydrogen from methane produced from farm waste at a local biogas plant, Ökostrom Mureck. It is still at the pilot stage, but Rouge H2 Engineering , the Graz-based start-up involved in the project, hopes to roll out more of these mini plants in the future. ‘There is a lot of interest, I can definitely confirm that,’ says Christian Legerer, engineering project manager at the company. 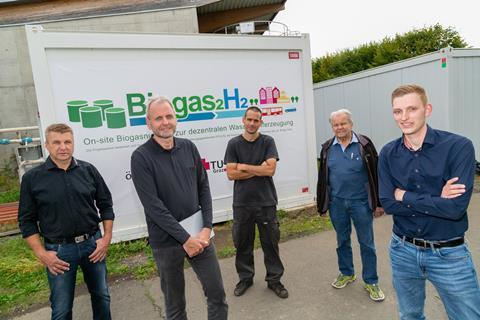 Most ‘green’ hydrogen is currently produced using electrolysis and renewable energy. But this comes with disadvantages. Surplus renewable energy cannot always be depended on and can be expensive. The process is also not carbon-negative, whereas the chemical looping process is.

Sebastian Bock, a postdoctoral researcher at TU Graz who worked on the project, says the plant first converts methane to syngas – a mixture of hydrogen and carbon monoxide – using steam and then the products go on to reduce iron in the reactor. The second step involves introducing high temperature steam. The oxygen from the water binds to the reduced iron, evolving hydrogen in the process. This process oxidises the iron closing the ‘loop’.

‘As we provide only steam in the reactor in the second step, we directly produce pure hydrogen,’ says Bock, explaining that this is an advantage of their process and a draw for industry, as a second purification step is not needed. 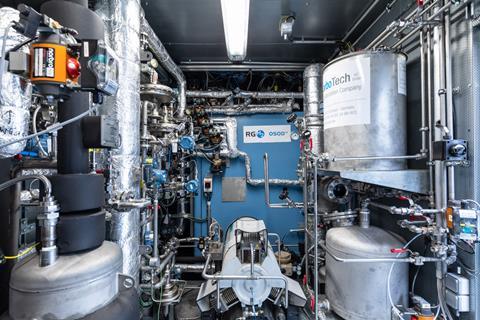 The inner workings of the hydrogen generator. The blue cuboid is the core development: a gas furnace with four tubular reactors in which the chemical looping process for hydrogen production takes place

Several issues exist that currently hold hydrogen back from wider use. ‘It has to be very cold, or kept at a very high pressure to get a decent amount of hydrogen into a usable volume,’ explains Mike Mason, chair and convener of the green ammonia working group in the UK, who also invests in a number of green technology enterprises.

‘It’s incredibly energy dense on a per kilo bases of raw hydrogen, but by the time you take into account all of the kit required to hold it in usable condition, it’s not,’ he adds. ‘It also has a nasty habit of seeping between the crystals of steel used to contain it and making it brittle, which causes all sorts of problems.’

Decentralisation of hydrogen production could solve some of these issues, as it reduces the need for extended storage or transportation. It could also be a useful add-on business for biogas plants in countries such as Austria and Germany, many of which are only able to run due to extensive subsidies from the EU.

While green hydrogen is not cheap, Legerer says costs can be kept relatively low – under €4.50/kg (£3.85/kg) – compared with electrolysis. This method could also sequester the carbon dioxide byproduct in the future as it is produced in a pure stream, a benefit the developers believe will be more in demand in the future as carbon capture and storage takes off.

The system certainly has potential, but whether it succeeds on a wider scale or not in the future depends largely on persuading industry to use it, Mason says. ‘I would ask the question “What problem does it solve?” It’s all very well producing hydrogen in small quantities locally, but what are you going to do with it? Who wants it?’ he adds.