Small peptides found in blood serum can act as effective biomarkers for cancer, US medical researchers have found.

Small peptides found in blood serum can act as effective biomarkers for cancer, US medical researchers have found.

Up to now, scientists have assumed that individual proteins will make the best candidates for cancer biomarkers in blood serum (the liquid component of the blood with the clotting factors removed). However, only a few proteins can act as unambiguous markers for cancer. 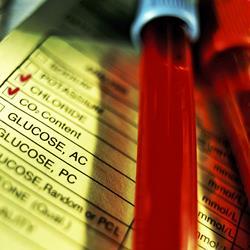 Using a novel analytical method, which involved capturing the peptides on magnetic beads and studying them with mass spectrometry, the researchers compared blood sera from healthy people with sera from patients with prostate, bladder or breast cancer. They found that by monitoring 61 peptides, which were differently expressed in the different sera, they could distinguish between the healthy controls and each of the different cancers.

After studying these peptides in more detail, Tempst and his team discovered that most were generated after the blood had been extracted. This implies that the peptides themselves are not derived from cancer cells, but that they are generated by enzymes excreted by cancer cells. ’It’s the proteases that are the real biomarkers; the peptides are surrogate biomarkers that are indicative of activity,’ Tempst told Chemistry World.

Tempst and his team are now trying to develop a simplified version of their peptide-monitoring method that could form the basis of bioassays for identifying different types of cancer.