Injecting a complex polysaccharide into the udders of dairy cattle can reduce the incidence of mastitis and help prevent the emergence of antibiotic resistance, report US agricultural scientists. 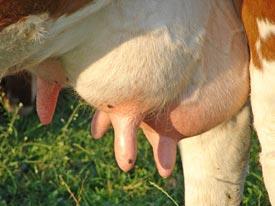 Max Paape and Douglas Bannerman of the US Agricultural Research Service laboratory at Beltsville, Maryland have developed a treatment based on dextran, a polyglucose biopolymer derived from the cell walls of yeast. The product, called Poly-x, is given to pregnant dairy cows about two months before they give birth. The animals are not milked at this time, a period called ’drying off’.

In two groups of 40 Holstein cattle given either dextran or a conventional injectable antibiotic, there were 16 cases of mastitis in animals given conventional treatment and only five in the Poly-x group.

The researchers say the polysaccharide acts as a ’biochemical bugle call’ by stimulating the immune system before mastitis-causing bacteria likeEscherischia coli can enter the teat. ’Previous work at Beltsville indicated that increasing the white blood cell count in milk will prevent infection. Poly-x increases the cell count in dry-cow secretions for the first five days of the dry period, thus preventing infection by bacteria,’ said Paape.

Mastitis is one of the most common and costly diseases in the dairy industry. A typical British dairy herd may have 40 cases per 100 cattle every year. The cost of treatment and lost milk production may be ?80 even for a mild case. But this will rise to more than ?1500 in the one per cent of mastitis cases that prove fatal.

The new treatment may cost a few pence per animal compared with about ?10 for a conventional antibiotic. But Carl Padgett of the British Cattle Veterinary Association said even if further trials prove successful it is unlikely to eliminate all types of mastitis. ’I can see how it might help prevent new infections of the udder - 80 per cent of which occur at or soon after drying off - but I can’t see it will do much for a cow with a chronically infected udder,’ said Padgett.