An explosion in a French university chemistry department has killed one person and seriously injured another.

An explosion in a French university chemistry department has killed one person and seriously injured another.

The explosion, at the Ecole Nationale Sup?rieure de Chimie de Mulhouse, happened on Friday on the ground floor of the three-storey research building on the campus in eastern France. The explosion was heard two kilometres away, and was followed by a fierce fire. 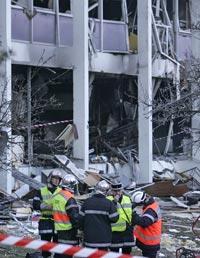 Mayor of Mulhouse,  Jean-Marie Bockel, confirmed that the blast killed one person, thought to be a 40-year old professor, and seriously injured another. No other fatalities have been reported. The cause of the explosion is as yet unknown, but is being linked to an ethylene leak.