Researchers have repurposed iron complexes found in blood into a catalyst that can hydrogenate organic molecules.1 The catalyst, which is also made from xylose, is fully derived from biomass-based resources, and has excellent stability and potential for recyclability.

The majority of vertebrates use the metalloprotein haemoglobin to transport oxygen around their circulatory systems. At the centre of these proteins are haem groups, which have a nitrogen ring with an iron centre that binds to oxygen.

For decades researchers around the world have tried to synthesise inorganic analogues of haemoglobin’s haem groups to mimic or expand on its ability to bind to and transform small molecules. A team surrounding Magda Titirici at Imperial College London, UK, had previously devised a biomass-derived catalyst that required an extraneous iron source.2 The team has now shown that they can use haemoglobin itself. 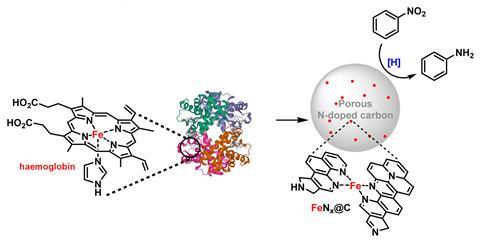 Naturally-occurring FeNx sites in haemoglobin were repurposed into hydrogenation catalysts

By mounting haemoglobin on a xylose-derived support they have prepared a catalyst that can hydrogenate nitroarenes into anilines, which are important feedstocks for dyes and pharmaceuticals. Imperial team member Hui Luo argues that the specific iron and nitrogen configuration in haemoglobin ‘makes it more valuable than a “naked” iron for some catalytic applications.’ Luo was also surprised that this centre survives the ‘two fairly harsh thermal treatments’ used to make the catalyst.

‘Mining metals emits quite a lot of pollution and causes environmental damage, while biomass on the other hand is way more abundant, albeit more difficult to obtain high purity,’ says Alain Li, another member of the Imperial team. The team proposes sourcing the haemoglobin from waste blood from abattoirs, and the xylose from wood waste.

The team showed the catalyst could be reused multiple times without experiencing a significant decline in performance. It also had good selectivity for the transformation.

‘This study is really interesting,’ comments Robert Morris from the University of Toronto, Canada, who also develops iron-based catalysts for sustainable transformations. ‘Alchemists used to prepare prussian blue (Fe4[Fe(CN)6]3) from ox’s blood, and the material they’ve got sounds kind of similar to what the alchemists were getting. The beauty of [this system] is that they can recycle it. In general, it’s a great direction to go in using a cheap supporting material and a cheap metal.’

The team’s next focus is making both the catalyst preparation and reaction conditions more sustainable and efficient. ‘I am confident we will succeed,’ says Titirici ‘but for this we will need loads of data on the environmental impacts of the processes involved.’