Scientists in Switzerland and Israel have developed a new way to depict aromaticity in polycyclic compounds. It uses nucleus independent chemical shift data to produce detailed graphs that illustrate the direction and strength of aromatic ring currents. Aimed at non-experts, the graphs serve as accessible images from which users can discern an aromatic molecule’s behaviour or reactivity.

The nucleus independent chemical shift (Nics) method is a popular system for probing aromaticity and is conceptually similar to NMR, as it is based on calculating the magnetic shift at the centre of a ring. However, it is difficult to gauge ring current density from Nics values so mistakes and misinterpretations are common. The new method developed by Eno Paenurk from ETH Zurich and Renana Gershoni-Poranne from Technion, called NICS2BC, combines Nics data with traditional bond current calculations to produce a visual graph that illustrates π-electron bond currents quantitatively.

NICS2BC begins by calculating the Nics values for each ring in the molecule and combines them (via a matrix equation) to give the bond-current weight, or strength, for each monocycle. The positive or negative sign of the Nics value determines the direction of the bond current. NICS2BC then superimposes the weighted bond currents onto the molecule to give a bond-current graph for the whole compound. Poranne says the image generated by NICS2BC allows users to ‘intuitively grasp what is happening in the molecule without having to go through a lot of different and complicated analysis’. And Judy Wu, an aromaticity expert at the University of Houston in the US, says it is ‘as simple as a single Nics plot, but reserves important details that one can only get from more traditional ring current maps.’ 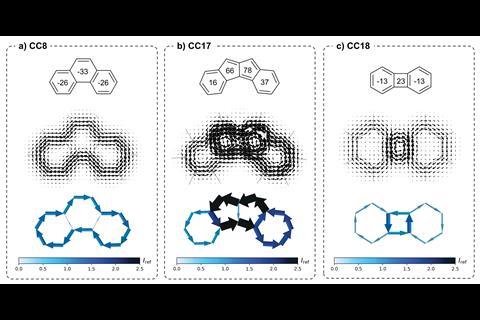 Analysing cata-condensed molecules with NICS2BC allowed the team to perform a quantitative assessment of their method, because they could compare the predicted bond-currents to those obtained by an independent method 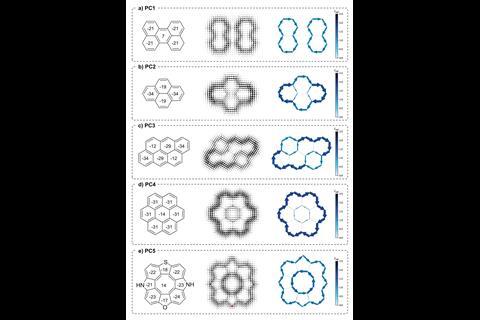 NICS2BC can also accurately reproduce the current flow in peri-condensed molecules of varying structure and aromatic character. In particular, it succeeds in cases for which Nics-based characterisation has previously failed

Paenurk and Poranne are keen to highlight the limitations of the method so that it is used ‘only when it is valid, we don’t want to promote people making data that’s not correct’. As NICS2BC is based on Nics, compounds containing transition metals and non-planar molecules are off the table. This stems from the need to use existing calculation methods, which often give inaccurate results for these types of molecules.

Poranne hopes to further develop NICS2BC to see ‘whether these [ring current] weights actually correspond to molecular properties or other physical descriptors of these molecules and whether they can be used to understand chemical activity or behaviour molecules on a local basis.’ Wu adds that she is ‘excited to see these methods extended to π-systems in the excited state’.