An unusual compound of xenon and hydrogen has been made under high pressure by researchers in the US. Thought to be held together by van der Waals forces alone, the compound may shed new light on how molecules interact under very high pressure. 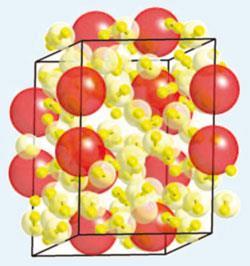 Model structure of Xe(H2)7. The xenon atoms are surrounded by dumbbell-shaped, freely rotating hydrogen molecules represented by the spherical shells

Led by Russell Hemley at the Carnegie Institution of Washington in Washington DC, the team were trying to encourage hydrogen gas to change to a solid metallic phase by doping it with xenon and squeezing the mix in a diamond anvil cell. ’Instead, we were surprised to discover a new xenon-hydrogen compound with an unusual structure,’ Hemley told Chemistry World.

Although the noble gases are famously unreactive, chemists have been able to cook up hundreds of noble gas compounds over the years. ’Most gas mixtures can be forced into a solid phase under enough pressure - but commonly the packing is disordered and arranged in a way to minimise the volume and free energy,’ explains lead author Maddury Somayazulu.

Here, it was different, as a regularly-packed compound, stoichiometrically Xe(H2)7, began to form at around 40,000 atmospheres. ’We were even more surprised to find that it was not single xenon atoms surrounded by hydrogen molecules as you might expect,’ says Somayazulu. ’We observed dumbbell-like dimers of xenon interspersed in a lattice of hydrogen.’

The structure of the compound was revealed by x-ray diffraction, Raman and infra-red spectroscopy, but a detailed explanation for the bonding in the compound is a challenge for the future. ’We don’t fully understand why this structure forms,’ Hemley says. ’It is obviously a very delicate interplay of van der Waals forces and weak covalent or possibly charge transfer interactions.’

The research opens up a new window into xenon chemistry, and may help to explain the so-called ’xenon deficit’ - the observation that xenon gas is present in the atmosphere in lower amounts than expected.

One possibility is that during early formation of the planet, high pressures may have produced xenon compounds that are now locked away underground. This may be plausible since the compound appears to be quite stable, remaining intact even under a crushing 2.5 million atmospheres of pressure.

Leonid Khriachtchev, who works on low temperature xenon compounds at the University of Helsinki, Finland, is interested by the research. ’It is well known that high pressures create a new physical world, changing many properties of matter to benefit noble-gas chemistry,’ he says. ’Unfortunately, the Xe-H chemical bond has not been found in the studied system, but hopefully experiments at somewhat different conditions will be more successful in this respect.’