Boroles get a stability boost

Scientists from Germany have reported a breakthrough in borole stability, using bulky fluoromesityl groups, which could help these anti-aromatic molecules realise their potential in optoelectronic devices.1

Boroles are heterocycles with a 4p-electron BC4 ring and subsequent electron-accepting abilities. This makes them great candidates for electron-transporting and accepting materials in organic light-emitting diodes and photovoltaics. 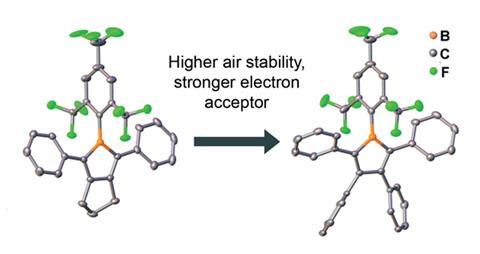 However, despite the array of previously reported borole derivatives, their strong Lewis acidic nature, attributed to the empty 2pz orbital on the B atom, makes them extremely unstable, especially to water and oxygen in air. Water coordinates to the boron centre and hydrolysis cleaves the B–C bond, breaking the molecules and limiting its practical use.

Eager to develop new and exciting materials with optical and electronic properties, Todd Marder and fellow boron chemists from the Julius Maximilian University of Würzburg have turned their attention to overcoming this obstacle. Previous work by the team highlighted the potential of the 2,4,6-tris((trifluoromethyl)phenyl) (FMes) group, its steric bulk and electron-withdrawing F atoms offering protection from hydrolysis without sacrificing electron-accepting ability.2

Employing FMes at the boron centre, by far no easy feat, they have now successfully synthesised a new pentaarylborole that is over 600 times more stable, compared to its mesityl counterpart, as well as a triarylborole analogue, itself a new class of borole.

‘It is always gratifying when one can really carry out molecular engineering and then actually make the molecule and find it to have the expected properties,’ explains Marder. ‘The biggest challenge is always doing carefully enough of the right experiments to achieve the highest possible standards,’ he adds.

Oliver Wenger, an optoelectronics specialist from the University of Basel in Switzerland, says the results represent a conceptual breakthrough: ‘I am very much looking forward to seeing these boroles in more applied contexts in the future’.

The group now plan to test the new compounds in devices whilst exploring other bulky electron-withdrawing groups for new borole derivatives. ‘The results reported in our study are very encouraging,’ adds Marder and explains that their next challenge will be ‘striking a balance between steric protection versus our ability to prepare the compounds’.