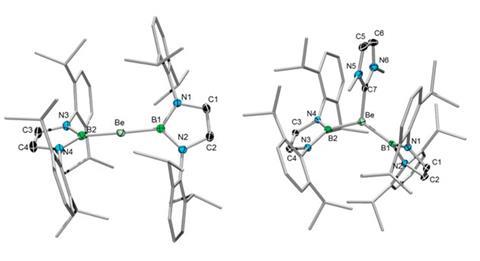 The first non-cluster bond between boron and beryllium has been reported by scientists in Germany.1

10 years ago, few reactions existed where boron behaved as an nucleophile. That all changed with the advent of lithium diazaborolidein 2006,2 and boron has been partnering up with myriad main-group, transition metal and lanthanide elements ever since. However, despite beryllium sitting right next to boron in the periodic table, a classical two-centre/two-electron bond had never been reported between the two neighbours, until now.

Holger Braunschweig and colleagues at the Julius Maximilians University of Würzburg have successfully synthesised a linear beryllium bis(diazaborolyl) compound by reacting lithium diazaborolide with beryllium chloride. It contains two highly polar covalent bonds between beryllium and boron, with the beryllium atom as the electrophilic centre – in contrast to the ionic bonding that is typical between lithium diazaborolide and other s-block elements, but in keeping with the established chemistry of beryllium.