Clusters of nineteen boron atoms gather together in a ring structure unlike any other seen, with two planar

-bonded aromatic systems nestled inside one another.

Lai-Sheng Wang at Brown University and Alexander Boldyrev at Utah State University in the US made the discovery: ’I was really excited when my postdoc, Wei Huang, first showed it to me,’ Wang told Chemistry World. ’It’s so beautiful, so circular.’

-systems have been seen in organic molecules, none have exactly this electronic configuration. 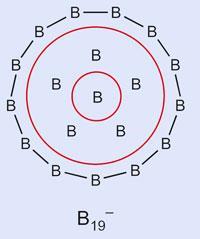 Xiao Cheng Zeng, an expert in modelling molecular clusters at the University of Nebraska-Lincoln, US, points out that this is actually ’the first time a concentric doubly

-aromatic system is shown to exist in a non-carbon based structure’. He calls the work ’a significant advance in aromatic chemistry’.

Replacing the central B6 unit with transition metals might produce boron-based nanosystems with tunable optical, electronic and magnetic properties, Wang and Boldyrev suggest. However Wang admits that they currently don’t even know whether  the B19- ring’s structure is stable. ’It’s like the buckyball, which was first discovered in the gas phase,’ Wang pointed out. ’It wasn’t until it was synthesised in the bulk form that it was realised it was stable.’

Wang’s group had actually generated the B19-  cluster  years before, using a laser to vaporise a 10B-enriched disc target. They then measured the cluster’s photoelectron spectrum to produce an ’electronic fingerprint’. From then on, the puzzle was which structure generated the correct spectrum.

The breakthrough came when Huang used a so-called Basin-Hoping algorithm to search for the most stable atomic arrangement of the 19-atom cluster. Then Boldyrev’s group performed more accurate calculations to generate a theoretical spectrum confirming the proposed concentric ring structure, and analysed its chemical bonding to discover the double

The teams are now continuing on to ever larger boron clusters, to determine when they become three-dimensional.