Inspired by a YouTube video, scientists in the US have confirmed that a simple bounce test can be used as a technique to indicate charge in a battery.

Alkaline AA batteries are one of the most common battery types and there are a range of approaches to assess the charge in these batteries, often entailing electronic indicators. Now, a team led by Daniel Steingart of Princeton University have correlated the coefficient of restitution (COR), a measure of bounce, with batteries at various charges and determined their charge to a similar degree of accuracy as in situ energy-dispersive x-ray diffraction (EDXRD). 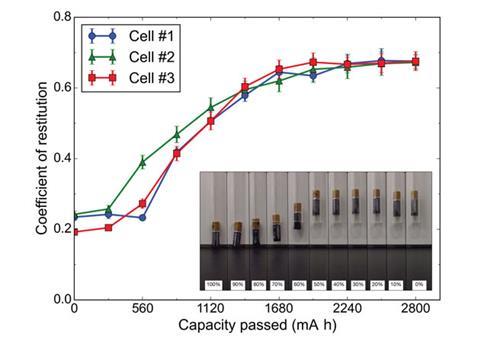 This level of accuracy is possible as the change in bounce is directly related to the physical changes that occur as the charge depletes.

An alkaline battery consists of a gel zinc anode and a MnO2 cathode. When the battery discharges, the zinc anode begins to oxidise, forming Zn(OH)42- ions in solution until the electrolyte is supersaturated. The ions then precipitate into ZnO around the zinc particles and create a percolation network throughout the anode, densifying the gel into a solid ceramic at approximately 50% charge. This change significantly increases bounce height at a rate that directly relates to the formation of ZnO. After the ZnO ceramic is fully formed, when the battery charge decreases to half, the coefficient of restitution will stabilise and battery bounce stays the same. 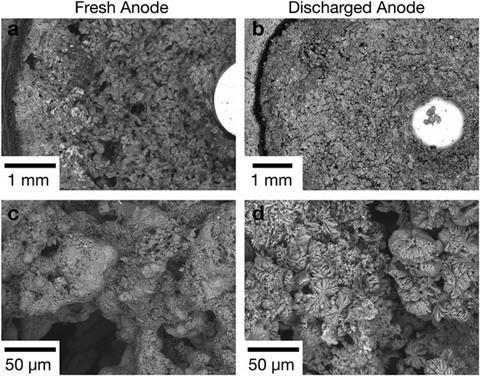 Steingart explains that he was particularly pleased with the information that could be gained through such a simple measurement. ‘We needed XRD to explain why the bounce changes this way, but once the correlation is made, a secondary school physics experiment can indicate where and how reactions are occurring in the battery.’ He also says that this worked for other alkaline batteries and that Duracell, who made the batteries they tested, confirmed that they design the batteries to withstand short drops of up to 30cm.

Yuxuan Wang, an expert in microscopy and advanced instrumentation at Ohio University, in the US, is impressed by the technique’s convenience: ‘The simplicity and low cost make it a great complement to other widely used diagnostic tools.’