Researchers in the US have developed a technique that could allow neurologists to draw a detailed wiring plan of the mammalian brain by inserting genes coding for fluorescent proteins into mice. Dubbed ’Brainbow’, the system reveals individual neurons within the nervous system in up to 90 different colours.

The work by Jeff Lichtman and colleagues in the Department of Molecular and Cell Biology at Harvard University uses a combination of genes from natural sources such as bioluminescent jellyfish or corals and man-made constructs to produce proteins in four different ’primary’ colours, red, yellow, cyan and orange. The researchers inserted the genes into the mice genome using the Cre/Lox recombination method developed by Du Pont in the 1980s. This allows tissue specific modification - in this case, the genes are expressed only in the cells of the central nervous system. 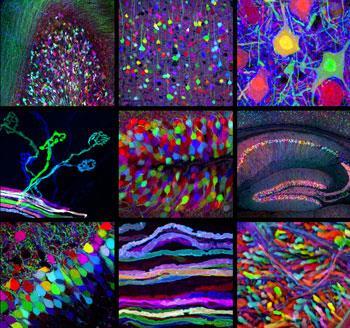 : Images of the brain produced using the new Brainbow technique

One or more gene constructs may be present in a single cell and the entirely random expression of these proteins in the cell cytoplasm creates the many possible colour combinations.

’In some cells we see a greyish colour because all the proteins are expressed about equally. But in most cells the proteins are at different concentrations giving us a range of hues,’ Lichtman told Chemistry World.

The group has been using the system to investigate the changes in the neural circuitry that occur during early development and have tracked the changes that occur in the mouse brain over the first 50 days.

’I am a developmental neurobiologist and was motivated to make this tool to study the rewiring that takes place during the early postnatal life of mammals when many of the axonal connections formed in earlier development are trimmed away. This ’synapse-elimination’ is the central focus of my lab,’ he explained.

’The research is showing the brain as we have never seen it before,’ enthused Marco Catani, who works on neuroimaging at King’s College London, UK. ’But the transgenic strategies for combinatorial expression of fluorescent proteins used to identify neurons in the nervous system cannot be applied to humans. My hope is that the allure of these spectacular images will inspire a new generation of anatomists whose main effort will be directed at filling the gap between human and animal brain anatomy.’

The researchers will next use Brainbow to compare how these changes occur in other groups of animals and plan to create transgenic fish, insects and nematode worms incorporating the genes. But the technique may also have applications in other areas such as drug development, Lichtman says. ’This may be a good tool to study certain disorders of the nervous system where the synaptic circuitry may be miswired (such as autism spectrum disorders). If there were potential therapies being developed for these conditions this tool might be used to see the effects of these therapies in animal models,’ he suggests.