Breaking news for the CO bond

The strongest diatomic bond, CO, is broken by oxidation on a gold catalyst

UK scientists have pinpointed the moment that the CO bond, the strongest bond of any diatomic molecule, breaks when oxidised by a gold catalyst.

Carbon monoxide (CO) poisons the blood by binding to the oxygen-carrier haemoglobin, preventing oxygen transport in the body. Its oxidation to carbon dioxide is an essential process for life preservation applications such as in submarines, mining industries and for space travel. Gold catalysts can be used in the oxidation process at ambient temperature.

Until now, research has only focussed on the catalysts’ active site and not on the reaction mechanisms. Graham Hutchings, Albert Carley and colleagues at the University of Cardiff have investigated the reaction mechanism occurring on a Au/Fe2O3 catalyst and found that CO dissociates at ambient temperature when co-adsorbed with O2. 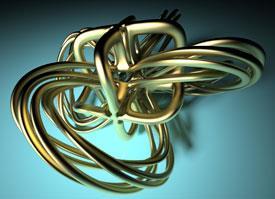 Unravelling the mechanistic puzzle of CO dissociation on gold surfaces

’The oxidation of CO gives a surprising result on a gold catalyst as the CO bond being broken is counterintuitive since it is the strongest diatomic bond,’ says Hutchings.

The team used a temporal analysis of products (TAP) reactor coupled with mass spectrometry to analyse the order in which products are made on the catalyst surface.  ’A TAP reactor is a way of putting very controlled pulses of relatively small numbers of molecules onto a catalyst and rapidly analysing the products that are made,’ explains Hutchings. Using the TAP reactor allows the initial aspects of the reaction to be explored, which were used to underpin the model surface science and theoretical studies.

’This is an elegant multi-technique study, combining both experiment and theoretical aspects that get to the heart of the catalytic mechanism,’ says Richard Catlow, an expert in computational and structural studies of complex materials at University College London in the UK. ’The most significant finding here is that there is strong evidence for O2 dissociating at the interface of the gold particle and the support.’

The team now plans to see if this mechanism is present in other catalytic systems.