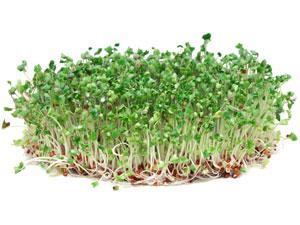 Scientists in the US have shown that dietary intake of glucoraphanin, a compound found in broccoli sprouts, reduces the negative effects of diesel exhaust particles on asthma and allergies. Diesel exhaust particles contain a range of redox active compounds that irritate the linings of the airways by causing oxidative stress. This irritation is even worse in asthmatics and allergy sufferers.

Glucoraphanin is a precursor for sulforaphane, which stimulates the expression of around 200 antioxidant producing enzymes. Antioxidants counteract the effects of oxidising species from pollutants in the tissues lining the airways.

The sprouts of three to four day old broccoli plants are particularly rich in glucoraphanin, although it is still present in older broccoli plants. Other cruciferous vegetables such as cauliflower, cabbage and kale are also good sources of glucoraphanin.

In their study the group based at the David Geffen School of Medicine at the University of California, Los Angeles, exposed 29 people with allergies to 300µg of diesel exhaust particles, a dose equivalent to around 40 hours spent breathing polluted air near a typical Los Angeles highway. Subjects who drank juice enriched with 100µmol broccoli sprout extract before exposure to diesel exhaust particles had a significantly reduced immune response.

‘One of the major impacts [on asthma and allergies] is the air that we breathe, and the contact with air pollutants which cause oxidative stress. Introduction of the correct type of antioxidant could have an effect on diseases such as asthma,’ comments Andre Nel, part of the UCLA team.

Albena Dinkova-Kostova, from the University of Dundee in the UK, who is also investigating the protective properties of sulforaphane, says the results suggest that eating broccoli ‘may be a very useful and practical strategy for managing the health impact of particulate air pollution on individuals with allergic diseases, who represent one third of the general population.’

However, Richard Mithen, whose research at the Institute of Food Research in Norwich, UK, involves broccoli, has reservations: ‘the dose of glucoraphanin provided was significantly greater than that normally consumed – in this case it was equivalent to consuming 200g of broccoli for four consecutive days – a standard portion is 80g.’

Eating more than two servings of broccoli every day might not be an attractive option for some, but sulfurophane can be extracted from broccoli and other cruciferous vegetables and taken in capsule form.