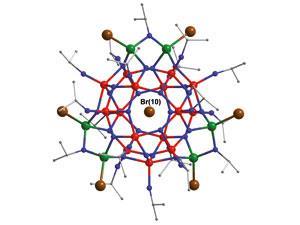 Scientists in the UK and China have encapsulated a bromine anion in a  supramolecular cavity to make a compound that could act as a model for metal-/anion-doped TiO2.  The model could be used to find ways to improve current TiO2-doped  photovoltaic, photocatalytic and sensing devices.

Dominic Wright from the University of Cambridge, UK, and colleagues, have incorporated a Br-  anion into a polyoxotitanate host, in which there is only very weak bonding between the bromine and the surrounding titanium oxide shell. 'As well as providing a model for the way in which anions like Br- are incorporated into TiO2, purely inorganic host-guest arrangements like this are rare in their own right,' says Wright.

Metal-doped TiO2 phases (in which low levels of metal ions are dispersed in the TiO2  host lattice) are of interest as photochemical catalysts to decompose pollutants and for photochemical water splitting (generating H2 and O2) from ambient sunlight, explains Wright. But, little is known about the active metal sites in these systems, or the way in which anions can be incorporated into the TiO2 host lattice. 'We were searching for large metal-doped titanium oxide cages, whose photochemistry might reflect bulk metal-doped material,' explains Wright. 'Molecular systems like the one reported in our paper provide model systems for both metal and anion incorporation.'

Guo-Yu Yang, whose research at the Fujian Institute of Research on the Structure of Matter, China, includes polyoxometalates and materials chemistry, says that making 'much bigger and much higher nuclearity oxo late transition metal clusters is a great challenge'. Yang adds that it is reasonable to assume that derivatives of the cage will be made in the future, which he says will not only promote the development of polyoxotitanate chemistry, but also enrich polyoxometalate chemistry.

Wright says the new compound should also be a single source material for the deposition of stoichiometrically-controlled Co-doped TiO2 films, which have important applications in photocatalysis and sensors. 'We are currently exploring the applications of such films in a number of settings in collaboration with Erwin Reisner's group at the University of Cambridge,' he says.