For the first time, the iron complex formed in the classic ‘ring test’ for nitrate ions has been isolated.1 The team behind the work hoped to settle the question over the metal’s oxidation state that has baffled chemists for half a century. But the brown ring compound turned out to break the rules and, according to the researchers, challenge the concept of ‘oxidation state’ as defined by the International Union of Pure and Applied Chemistry (Iupac). 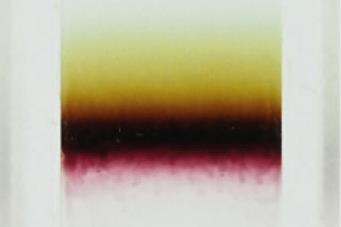 The ring test for nitrate ions is a staple of undergraduate inorganic analysis. Concentrated sulfuric acid and an iron sulfate solution are poured into a test tube, the sample for testing added and if nitrate ions are present a brown ring will appear between the acid and sulfate. Although chemists have known about the compound that makes the brown ring for more than 100 years, it remained elusive – nobody could crystallise the iron–nitrosyl complex.

Chemists studying the unstable molecule in solution puzzled over what oxidation state to assign to iron. Suggestions ranged from iron(I) bound to an NO+ ligand, to iron(II) with a neutral NO ligand or even iron(III) attached to an NO–.

Maybe the problem is our mania for classifying things

Now, Peter Klüfers and Georg Monsch from the Ludwig Maximilian University of Munich, Germany, have grown the first crystals of the brown ring ion. Key to their success was a large gallate counterion featuring perfluoropinacolato ligands. The brown ring ion turned out to be a +2 cation, surrounded by five water molecules and one nitrosyl ligand.

However, their discovery does not provide a definitive answer to the question of iron’s oxidation state. Instead, it ‘challenges the concept of “oxidation state” itself’, the authors write.

According to Iupac’s oxidation state rules,2 electrons in a bond are assigned to the most electronegative element. Nitrosyl is already recognised as a special case, often giving ambiguous results.

A new spin on things 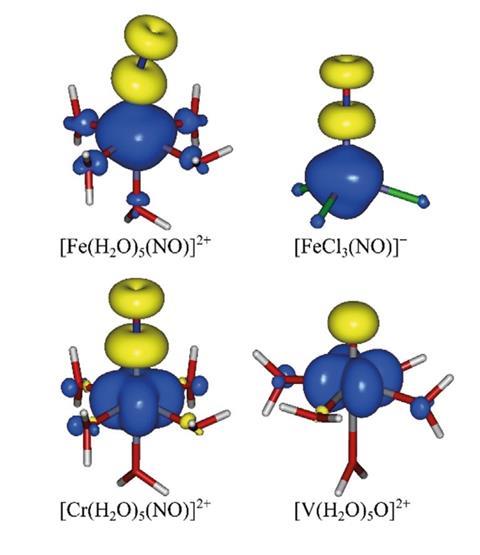 The spin population of some species, including that of the brown ring complex that forms in the test for nitrate ions (top left)

In the brown ring chromophore, unpaired electrons and spin polarisation complicate the situation. ‘When they looked at which electrons belong to which atom, they found out that the spin up and spin down electrons behave differently. The spin up electrons would be assigned to one atom and the spin down to another,’ explains Pedro Salvador from the University of Girona, Spain, who helped Klüfers and Monsch determine the ring ion’s oxidation state.

The brown ring’s spin polarisation makes it incompatible with Iupac’s ‘winner takes it all’ rule. ‘This case is currently not covered by the rules despite the fact that alpha–beta [spin] separation is the standard in contemporary computational approaches,’ says Klüfers.

Iupac already recognises the problems associated with ligands like nitrosyl, says Josef Takats, from the University of Alberta, Canada, who was part of the team that compiled the recommendation in 2016. ‘It explicitly recognised that there are “limits beyond which oxidation state ceases to be well defined or becomes ambiguous” and such cases are described and discussed.’ Another member of the Iupac team, Patrick McArdle from the National University of Ireland Galway adds that ‘doing molecular orbital calculations is not a good way to find out about oxidation state’. ‘We decided to go with a definition based on simple straightforward rules that could be applied to any compound.’

McArdle points out that the Munich team acknowledges that ‘there are no mandatory reasons to deprecate the Fe(I)NO+ formula in favour of anything else’. ‘That is the formula that comes from the definition as it is,’ he says.

‘Maybe the problem is our mania for classifying things,’ Salvador muses. While oxidation states help chemists predict and rationalise reactivity patterns, ‘for some molecules we believe that following the Iupac rules you cannot get what chemical intuition will tell you’, he adds.

‘In the [Iupac] task group they didn’t pay much attention to what calculations can do about ambiguous cases and perhaps they could have a little bit,’ Salvador says. ‘But chemistry is very complicated and it’s difficult to have only a single rule for everything.’