A chemist and a physicist from Stanford University, US, have developed an electrical device for suppressing Brownian motion and used it to trap proteins, viruses and semiconductor nanocrystals. 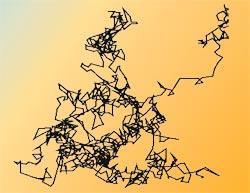 The random movement of small particles suspended in water was discovered by botanist Robert Brown in 1827 when studying pollen grains. The effect was finally explained in 1905 by Albert Einstein, who realised it was caused by water molecules randomly smacking into the particles. Over 100 years later, Brownian motion can still cause problems for scientists trying to study small biological particles in solution, because they move around too much.

The device developed by physicist Adam Cohen and chemist W E Moerner consists of a glass disc with a central dip, four electrodes and a fluorescence microscope. Particles are trapped in the central dip region by using the microscope to detect the particle’s movement and then applying a pattern of voltages to the four electrodes to reverse that movement. The electrodes can act directly on charged particles or can cause the solution to move, through a process known as electroosmotic flow.

The researchers have shown that the technique is gentle enough to trap protein molecules, viruses, lipid vesicles and semiconductor nanocrystals without damaging them. It also naturally traps single particles, because the forces required to trap a particle push any other particles out of the dip. As well as allowing scientists to study particles in solution in unprecedented detail, Cohen and Moerner envisage that their device could be used to control the delivery of genetic material by viruses and to construct nanostructures one molecule at a time.