Building a nation of scientists 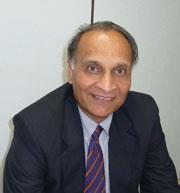 Your research is focused on organic chemistry. What attracted you to that field?

There is something intrinsically fascinating about organic chemistry. In my early high school years, when I was exposed to interesting chemical structures, I was attracted to them. I had a sense of appreciation for art and organic molecules to me provided a wonderful expression of art at a molecular level.

What are your main achievements in the field?

I have worked in many areas of organic chemistry, but it’s synthesis that’s given me the greatest pleasure. As organic chemistry advanced, different contemporary challenges came to my attention. The main driver for me to pursue those challenges was the intricacy of the target structure synthesis. There was also an element of expectation that perhaps our research might become useful to society. We continue to need new drugs for a variety of disorders, so we synthesised a large number of natural products; many of them are biologically active and it is quite possible that some of them can provide leads for new drug discovery.

Over the last few years, I have become interested in how to address a problem that the ageing population is facing - neurodegeneration. It has been shown that some natural products can slow down neurodegeneration. In some cases, there is also an indication that they can help restore lost cognitive function. So I have been working on the synthesis of such lead molecules. As I’m getting older, I recognise the need for doing something in that area!

You’ve won numerous awards. Which achievements are you most proud of?

I don’t think that awards and recognition have necessarily brought me a great sense of joy. They do bring a sense of satisfaction because your peers have recognised your work. But I don’t think any serious researcher works for awards. It is the sheer joy of research that keeps people going. Recognition has come my way, but don’t think that I can equate that with the joy of doing research.

What are the challenges facing scientists in India and how could these be overcome?

Scientists all over the world are facing challenges on two fronts. The first problem is that scientists are not being supported by society as much as they should and some governments are not always forthcoming in terms of providing budgetary support. The second problem is that scientists, and science in general, have become isolated both in terms of discipline and, to some extent, in terms of geographical location. This is being redressed now with increasing international collaborations, so in the geographical sense, the isolation is being reduced. But I think disciplinary isolation vis a vis other knowledge streams and fragmentation of science is still a serious challenge.

It is a good time for scientists in India because the government is very supportive of science. Funding is no longer as serious a problem as it is in other parts of the world. Recently, our prime minister said that the budget for science will be almost doubled over the next few years. But I’m not too sure that we as a scientific community are steering science in India in the direction that it ought to be heading. I believe that the government and the scientific community must set a goal that in the next 10 years, India will be among the world’s leading scientific countries.

What is your opinion on the perception that Indian science and research is falling behind the rest of the world, following recent comments by Prime Minister Manmohan Singh?

Prime Minister Singh’s statement referred mainly to China. China has made more progress in science and technology than India. Scientific productivity in India has increased, but not as much as in China. Since we are behind, to simply say that we are walking and walking well is not enough. We should be galloping to catch up. My judgement is that our progress is not commensurate with the support that the government is providing, and not commensurate with the capacity, capability, enthusiasm and the vibrancy that our youth have. We can achieve much more.

How do the different industries compare (the pharmaceutical industry in particular or the more general chemical industry)?

It is only over the last 10 or 12 years, since the economic reforms, that industry in India has grown at such a rate so as to be in a position to invest in research and development. I expect that investment by industry is going to rise; however, the current level of investment is not in an acceptable range. There are certain sectors - pharma, for example - and some other chemical industries, where I think India’s potential is immense, but there are some challenges with the policies that are being pursued. We have to devise a well thought out strategy.

The prime minister’s Science Advisory Council reported that there in an absence of any Indian universities among the world’s best. What is your opinion on the quality of universities in India?

I’m not a great believer in the ranking systems being followed, but the fact is that no Indian university features among the top few hundred  universities. However, if we were to look at undergraduate teaching, India has institutions that produce graduates through excellent teaching and training. The graduates are probably as good as they are anywhere else in the world. If you were to grade an institution on the quality of undergraduates, I would say that the Indian Institutes of Technology rank among the top 10 institutions in the world. But, if you bring in research and other elements, they will not feature anywhere near the top. So the quality of research is a serious problem. I think it is high time that the scientific community and scientific leadership in our country sort out an effective, implementable strategy to make a major shift.

You experienced difficulty obtaining a visa to travel to the US in 2006, when you were invited to give a lecture at the University of Florida. At the time, a report from the National Academy of Sciences in the US said that at least 3000 scientists had faced a similar problem. Have things improved since then or do you believe that the visa problem is hampering scientific progress and career development for scientists?

It was ironic that I and a leading scientist from the US, Jane Lubchenco (who at that time was president of the International Council for Science before I succeeded her), wrote an editorial about the principle of universatility of science and the visa regime in Science a few months before this happened. We wrote that it was important for the international growth of science that scientists were able to travel. Little did I realise that soon I would be a victim of this! I think the situation has improved, but a lot more needs to be done. While the US National Academy of Sciences is playing a very positive role towards this end, the academies can only do the advocacy. Eventually, it is the government and the state department of security staff that makes the final judgement.

If you have any spare time, how do you fill it?

For most scientists, and I’m no exception, your research is a hobby. What other profession can give you that pleasure and privilege? In a previous interview, I was asked what I would wish for. I said we Indians believe in rebirth and so the only wish I have is that if I were to be born again, I would be a scientist. I would like to be a chemist, hopefully a better one.