A new class of complex containing a borohydride group bound between two nickel atoms has been made that may have applications in molecular magnetic materials.

A new class of complex containing a borohydride (BH4-) group bound between two nickel atoms has been made that may have applications in molecular magnetic materials.

A molecular model of an enzyme’s active site that mimics its electronic and structural features is a strategy available to biochemists that allows them to understand how an enzyme functions.

Berthold Kersting and colleagues at the University of Leipzig, Germany, and Universit? Pierre et Marie Curie, France, have been particularly interested in macrocyclic hexaaza-dithiophenolate ligands as models of hydrogenase enzymes, and in the complexes they form when two nickel atoms are placed in the cavity at their centre. 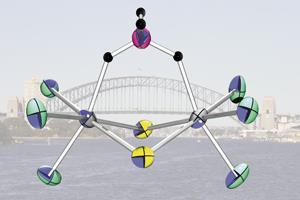 The team investigated the ability of simple biologically-relevant anions to attach to such complexes and isolated the first example in its class of a borohydride group binding to both of the nickel atoms by forming a bridging link between them.

The remarkable stability of the Ni---H-BH2-H---Ni bridge in this complex was made possible by the use of a physical shield. Two bulky tert butyl groups attached to the phenyl components of the ligand were able to prevent it from undergoing normal decomposition reactions.

As well as furthering understanding of the role and behaviour of hydrogenase enzymes, says Kersting, the paramagnetic transmission properties of this complex may provide a basis for the construction of a new series of molecular magnetic materials.