Radioactive waste should be stored deep underground at sites where local communities have had the opportunity to participate in, and even withdraw from, the planning process. This call for action comes from the Committee on radioactive waste management (CoRWM), which was charged by the UK government’s Department for Environment, Food and Rural Affairs to come up with a solution to the mounting stockpiles of waste from the nation’s reactors. 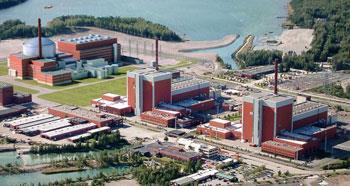 The repository at the Olkiluoto nuclear complex in Finland should store all the country’s high-level nuclear waste.

The answer is far from revelatory. The committee’s report, released on 31 July, reiterates their draft recommendations from April. ’And engineers have known for 50 years that deep geological disposal must be the way ahead,’ commented Ian Fells, emeritus professor of energy conversion at Newcastle University, UK.

But the report stresses the importance of community involvement in deciding where waste storage facilities should be located, and the need for longer-term thinking. ’We’ve always managed waste in this country as if it only has to last 20 or 30 years,’ said CoRWM chairman, Gordon MacKerron. The issue is fundamentally technical and scientific, but also social and political, he added, and requires urgent action.

MacKerron insisted that the government should not ’cherry pick’ which of the committee’s proposals to implement. ’Here’s an integrated package of proposals, at your peril will you only do one or two of them,’ he said.

Welcoming the report, environment minister David Miliband said, ’Public safety and environmental protection will be our utmost concern in taking forward the programme for the long term management of the UK’s higher activity wastes. We have no intention of forcing nuclear waste on any community.’

The report predicts that an underground nuclear waste repository for spent fuel could be ready in about 35 years, and would take at least 60 years to fill. One such repository is already under construction in Finland, at the Olkiluoto nuclear complex.

An independent organisation is urgently needed to oversee the process, MacKerron said.

But there are other solutions. Transmutation - more normally associated with alchemy - could be a future answer for getting rid of radioactive waste, CoRWM’s deputy chairman Wynne Davies told Chemistry World. Irradiation can turn one isotope into another that may have a much shorter half-life, making it easier to store.

’That’s something that is technically possible at a laboratory scale, but it’s never been done at a full scale,’ said Davies. ’For that, you’d actually need radiation facilities.’

Burying the waste kilometres under ground in boreholes is another possibility, he said, although the technology is some way off being ready. ’We’re not closing our minds to the idea that something might come up in 30 or 40 years time,’ said Davies.

’It is encouraging that CoRWM have not specified any particular method for eventual disposal, so leaving open the option of potentially better alternatives to conventional mined repositories, such as very deep boreholes,’ agreed  Fergus Gibb, a geochemist at the University of Sheffield, UK.

’The next natural step is to get all scientists together to give the scientific point of view on how to implement CoRWM’s recommendations,’ said Nick Evans, a radiochemist from Loughborough University, UK. Evans is organising a meeting in partnership with the Royal Society of Chemistry and other organisations, for geologists, physicists, chemists and engineers to collate a list of areas where more research is needed.

The committee would not comment on potential sites for a repository, or on the impact of building new nuclear power stations. ’We don’t want our recommendations to be seen as either a red light or a green light to nuclear new build. there is a choice whether we create new waste: there is no choice about how we manage existing waste,’ MacKerron said.