C2’s two carbon atoms aren’t joined by a double bond as usually thought, or even a triple bond, but in fact a quadruple bond. So say Sason Shaik at the Hebrew University of Jerusalem, Israel, and colleagues, who have assessed the fourth bond’s energy.

’It is hanging on the carbons with hybrid orbitals pointing away from the inter-nuclear region,’ Shaik tells Chemistry World. ’For many chemists, this looks impossible.’ And despite only boasting around 15% of the strength of the first three bonds, it is stronger than a hydrogen bond and, therefore, should influence C2’s reactivity.

Transition metals, lanthanides and actinides are already known to reach bond orders as high as six. However, Shaik and colleagues struggled to convince their paper’s reviewers that main group elements could have quadruple bonds, even though the team previously proposed similar outward-pointing hybrid orbitals in [1.1.1]propellane. The crucial evidence, Shaik explains, came from quantum mechanical calculations of the energy difference between the fourth bond’s singlet and triplet ground states, which matched prior experimental observations.

In the singlet ground state, the bond contains a pair of electrons of opposing spin, while in the higher energy triplet ground state two electrons have the same spin. ’If this were a very weak bond, like a diradical, the triplet would be very close to the singlet, maybe 2-3kcal.mol-1  higher in energy,’ Shaik explains. ’That diradical should be very reactive. But here, the triplet state lies something like 26kcal.mol-1  higher.’ Intrinsic bond energy is half the difference between the singlet and triplet states and, using four different computational methods, the team placed it between 11.6-14.8kcal.mol-1. 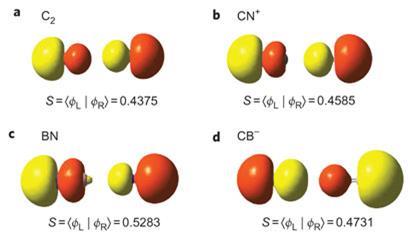 Quadruple bonds could form in a number of chemical species

Shaik says that the fourth bond should make less reactive molecules than diradical species. ’If C2 were a diradical it would immediately form higher clusters,’ he says. ’I think the fact that you can isolate C2 tells you it has a barrier, small as it may be, to prevent that.’ He also predicts that further chemical bonding surprises remain. ’There are some things still that have evaded all of us.’