A new UK immigration cap could bias against researchers looking to come to the UK.

This week UK Home Secretary Theresa May announced plans to introduce an annual cap of 21,700 highly skilled and skilled non-European workers, such as researchers, entering the UK. The changes will come into force from April 2011.

One thousand of these visas will be available for ’highly skilled’ migrants that display ’exceptional talent’, such as scientists, academics and artists. The remaining 20,700 ’skilled’ migrants will be allowed entry if they have a graduate level job offer from a UK institution or company.

But there are concerns that the points based system (PBS) used to decide whether individuals qualify for a UK visa isn’t set up to adequately recognise progression or success in a scientific career.

Migration into the UK falls into two categories - highly skilled workers (the so called Tier 1 route) and skilled workers (Tier 2). The existing Tier 1 route includes entrepreneurs and investors entering the country. This route will be reformed, but will not be subject to immigration limits in order to bring more money into the country. International transfers within businesses will not be limited, but will require employees to be earning a salary of over ?40,000 to be able to stay in the UK for over 12 months, and their stay will be restricted to five years. 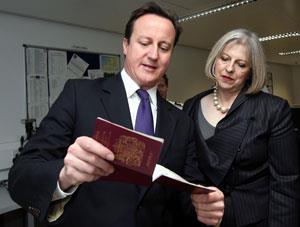 The new Tier 1 route for ’exceptional talent’ will be open to migrants who have won international recognition in scientific and cultural fields - such as Nobel prize winners - or those who are likely to achieve such recognition in the future.

’We do not accept the premise of needing to cap exceptional talent, because the UK needs global scientists more than global scientists need the UK,’ says Imran Khan, director of the Campaign for Science and Engineering (Case) in the UK. ’If they can’t get into the UK, they will go somewhere else.’

But is it the points based system that Khan pinpoints as particularly problematic, especially for those hoping to enter the UK on a Tier 2 visa. ’The way the PBS has been set up does not reward scientific careers,’ he says. ’If you have a PhD you get 45 points, compared to 80 points for an MBA - that’s really skewed and is based on a very superficial judgement on the value of migrants to the UK,’ he adds.

’I think [the immigration cap] could very well damage UK science, but there is an opportunity for the Home Office to prevent that happening by reforming the PBS in order to properly reward scientific careers,’ states Khan.

’The government recognises that there is an important contribution made by scientists and researchers to the UK and the economy,’ a spokesman from the UK department for Business, Innovation and Skills (BIS) told Chemistry World. ’The changes [to the Tier 1 route] actually give a greater weight to academic qualifications, so we can still attract the high quality researchers and scientists.’

Science-focused industries are also concerned by the new proposals. While the provision for intra-company transfers received a positive response, the Association of the British Pharmaceutical Industry (ABPI) said in a statement that it ’welcomes the creation of the exceptional scientists category, but questions if the number proposed is sufficient to meet the demands of academia,  research charities and industry.  The UK pharmaceutical industry alone currently employs over 27,000 people in R&D.’

The Home Secretary also announced that she would be launching a consultation on student visas, aiming to restrict entry only to those studying at degree level, though with some flexibility.

Students currently account for almost two-thirds of non-EU migrants entering the UK each year, said May, with nearly half of these studying for courses below degree level. Too many students at these lower levels are abusing the system by entering the UK with a view to living and working rather than studying, said May, a practice which must be curbed. ’The thing to emphasise is that legitimate and high quality higher education and further education will be protected,’ a BIS spokesperson said.