A team of researchers in the Netherlands have devised a trap that can pull carbon dioxide out of the air.

The researchers, led by Elisabeth Bouwman at the Leiden Institute of Chemistry at Leiden University, have developed a selective copper complex - predisposed to capture CO2 and ignore other atmospheric gasses. Equally important, the trapped CO2 can be removed through electrochemistry, requiring a relatively low electrical potential to replace lost electrons.

A solution of this copper complex absorbs carbon dioxide upon exposure to the air. The complex has two binding sites, with a copper atom on each side of the site. As the team understands the process, the oxygen atoms of an incoming CO?2 molecule bind to each of the copper atoms. The carbon atoms of two such molecules bind to one another, creating an oxalate bridge between the two copper ions. 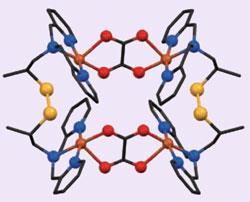 It ran like a charm for a little over three hours, but after that, the lithium oxalate build-up began to hamper the electrodes. In practice, the precipitate would be harvested, and the oxalate could be converted into useful chemicals such as methanol, formaldehyde, the antifreeze ethylene glycol, or oxalic acid, which is used in wood restoration and some household cleaners.

’Our study is purely fundamental and the findings will need a lot of additional studies before it could possibly be applied in an industrial setting,’ cautions Bouwman. The need for an electrical potential means that carbon capture would still come at a cost.

’The article describes an impressive portion of inorganic chemistry,’ says Johannes Notni, an expert in carbon dioxide-binding transition metal complexes at the Technical University of Munich, Germany. Nevertheless, he believes that human chemistry will never outdo nature’s efficiency in converting carbon dioxide to fuel. ’In order to do the best for climate protection, it appears most promising to close down fewer photosynthesis factories - in other words, to keep up the rainforests and other natural sinks for carbon dioxide.’