Scientists from the UK have used a molecular capsule to control the reactivity of an organic compound.

A molecule’s reactivity is commonly controlled using protecting group chemistry, in which a certain functional group is blocked to avoid unwanted reactions at that site. However, this can be costly in terms of time and reagents.

Now, Maarten Smulders and Jonathan Nitschke from the University of Cambridge have used a supramolecular cage as a whole-molecule protecting group. An organic molecule can be encapsulated within the cage, preventing its reaction, and addition of a competing guest can then release the molecule and initiate the reaction when required.

The team constructed the cage from four iron units in a tetrahedral arrangement. External sulfonate groups confer water solubility, while the interior of the cage provides a hydrophobic environment to encapsulate organic molecules. Unlike traditional protecting group chemistry, this method relies not on the functionality of the molecule but on its size and shape, providing a complementary protection strategy to those commonly used. 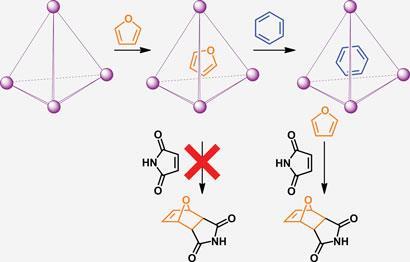 Encapsulation of furan prevents its reaction, but upon addition of benzene as a competing guest, furan is released from the cage and undergoes a Diels-Alder reaction with maleimide

Smulders and Nitschke demonstrated the cage’s utility by controlling the Diels-Alder reaction between furan and maleimide. Adding furan to a solution of the cage resulted in a high degree of encapsulation, as evidenced by NMR spectroscopy, with only a very slow leaching rate. However, upon addition of benzene as a competing guest, all furan was released from the cage within one hour to undergo the typical reaction with maleimide.

’This is certainly a most interesting example of capsule-based supramolecular chemistry and a unique utilisation of these compounds,’ says Martin Johnston from Flinders University, Australia. He adds that by modulating the release of the competing guest, the reaction rate of the encapsulated molecule could also be controlled.

Furthermore, increasing the complexity of the system, to include more than one cage or substrate, could begin to mimic the large degree of compartmentalisation found within biological systems. The synthesis and characterisation of the necessarily larger cages may prove challenging, however, Nitschke remains enthusiastic about the research prospects in this area. ’We’re really interested in seeing what we can do inside a molecule that you cannot do in bulk; that is very fertile ground for exploration right now,’ he says.