Teaming up with titanium is predicted to deliver stable seven-coordinate carbon dication, larger than any seen in the lab 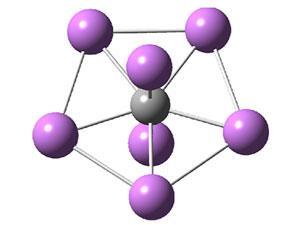 US and Chinese chemists say that they’ve calculated the structure of a stable carbon dication that would have a higher coordination number than any yet seen experimentally. Xiao Cheng Zeng from the University of Nebraska-Lincoln and colleagues have found that a carbon surrounded with seven titanium atoms can fulfil the necessary stability criteria. ‘We examined all first-row transition-metal elements and most main group elements,’ Zeng tells Chemistry World. ‘Only titanium fits thus far.’

Surrounding carbon with more than four other atoms moves beyond conventional two-centre, two-electron bonds to arrangements sharing fractional numbers of valence electrons. The current record largest cluster seen experimentally was a hexacoordinate carbon structure synthesised by Japanese researchers in 2008. But theoretical physical chemists are curious to see how much further coordination numbers might be pushed.

Perhaps the most important property for a credible large molecule is that it is lower in energy, and therefore more stable, than its isomers. ‘Several heptacoordinate carbon species have been proposed, but they all have lower-energy isomers,’ explains Zeng’s colleague Yi Gao, from the Shanghai Institute of Applied Physics, Chinese Academy of Sciences. Other important stability requirements are a high symmetry level, low charge and a large energy gap between lowest unoccupied and highest occupied molecular orbitals.

To reach a stable heptacoordinate species, Zeng and his colleagues started from a CAl5+ planar pentacoordinate carbon cation that they had previously predicted to be the  global energy minimum among all its isomers. Gao modelled structures starting from this arrangement, examining various metal ligands with different charges. That showed him that CTi72+ with five titanium atoms in a flat pentagonal arrangement, plus one above and one below, was highly stable. Nan Shao from Brookhaven National Laboratory in Upton, US, then showed that this was the global energy minimum. 'When it is bonded with certain groups or ligands to form a neutral species or compound, this motif alone could be very stable and keep its structure,’ Zeng explains.

This study shows chemists’ ongoing fascination with chemical bonding, notes Henry Rzepa from Imperial College London. ‘New ideas are as likely to come from computation as from experiment, and there is a vibrant, fruitful, interplay between these,’ he said. ‘The CTi72+ system here is a wonderful example of how this process happens. The strength of ideas such is that it inspires experimental chemists to go make it in the lab.’