New snapshots of Mars appear to show large outcrops of carbonate-bearing rocks, indicating that regions of the Red Planet could once have been an ideal environment for life to thrive.

The images, which were taken by NASA’s orbiting exploration satellite, the Mars Reconnaissance Orbiter, identified kilometre-sized areas of rock containing magnesium carbonate. The findings support the theory that life could once have arisen on Mars and may still be found today. 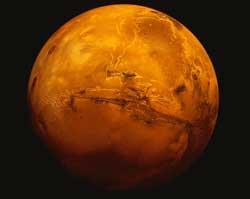 Rocky outcrops could have been the cradle for life in Mars

Around four billion years ago, the climate of Mars was similar to Earth, with water on the surface and a carbon dioxide atmosphere. However, since Mars has no magnetic field to protect it from the solar wind, the atmosphere was gradually stripped away and dramatic climate change turned the planet into an inhospitable desert. Even so, colonies of primitive microbial life could still be teeming beneath the surface - but despite decades of research, no concrete evidence for this has been found.

The chemical composition of rocks on the surface provides a clue for determining whether or not life could have survived on Mars. If conditions were right for carbonate-bearing rocks to form, they would also have been favourable for life. But previous studies of Martian soil by missions such as the Mars Exploration Rovers in 2004 have found very little carbonate - indicating that any water on the Martian surface was likely to be far too acidic to have supported life. 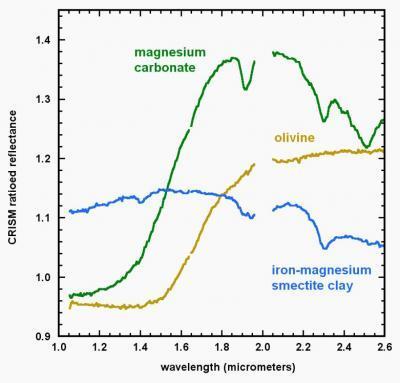 The carbonate mineral that we found signals neutral to alkaline waters in the past,’ Ehlmann told Chemistry World. ’I think we’re finding that ancient Mars, like Earth, had a variety of watery environments - and one of these might have been an ideal habitat for life.’

Ehlmann hopes that the new images will provide an exciting new location for future missions to Mars to explore - as well as granting new insights into how planets can evolve.

’This research confirms the idea that certain areas of Mars could have been a cradle for life,’ says Andrew Coates, head of the planetary science group at University College London, UK.

’We are gradually building up a picture of what Mars was like 3.8 billion years ago,’ Coates continues, ’And since Earth is the only place that we know contains life, the promise of finding it anywhere else in the universe is fascinating.’