Cardboard to create current from bacteria

Researchers in Germany and China have discovered that cheap corrugated cardboard makes a high-performing electrode for microbial fuel cells, a key technology for sustainable energy production.

Microbial fuel cells (MFCs) generate electricity by the catalytic chemical reactions of microorganisms. The microorganisms digest organic compounds and in the process, generate electrons that drive a current. MFCs have gained attention in recent years as they have the potential to simultaneously generate electricity and treat industrial wastewater. The key to their successful implementation, however, lies in increasing their performance while driving down the cost of expensive electrode materials.

Inspired by first author Shuiliang Chen, the team, consisting of the groups of Haoqing Hou, Jiangxi Normal University, China, and Uwe Schröder at the Braunschweig University of Technology, Germany, used corrugated cardboard as a precursor material. They carbonised it and found that it retained its channelled structure, which they say is the reason for its unexpected high performance. Schröder elaborates: ‘It is a 2D process and we need a high surface area to achieve a high turnover rate and performance. We figured out that with this carbon material, its microstructure is not the key, it is rather the corrugated, channel structure.’ 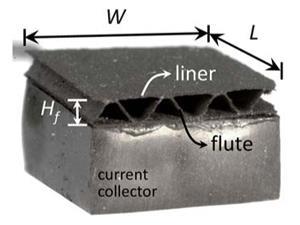 The team tested the electrode and found that the MFC reached a current density of 40mA cm-2 (milliamperes per square centimetre). Current MFCs can only reach under 4mA cm-2. Further benefits of the material include the stackability of the corrugated layers to increase performance, and the lack of acid pre-treatment required in electrode preparation to remove elements such as calcium and sulfur, which are commonly found in paper materials. ‘The cardboard would not have to be treated to make a good electrode material,’ says Schröder.

Korneel Rabaey at the University of Ghent, Belgium, who researches microbial technology, finds the work promising. ‘They used a very cheap material in a creative way and the outcome is spectacular,’ he says. However, he concedes that more research is needed. ‘Scaling up needs to be the main focus; cardboard is not a very strong material. My key concern is once the material is put to the test, the structural integrity will be a barrier to its application.’

This is something that Schröder and his group are planning to investigate as they continue with their research.