A fundamental study into crystal growth has grabbed the attention of global industrial oil companies.

A fundamental study into crystal growth has grabbed the attention of global industrial oil companies. 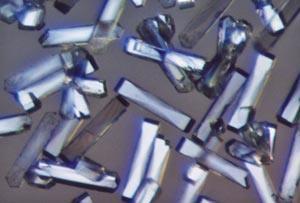 Michael Anderson at Manchester University, UK, has been awarded over ?1 million for an international project to work out how zeolite crystals grow. Exxon Mobil has provided 10 per cent of this money in order to find ways of bringing down the costs of making zeolites that currently require expensive synthesis techniques.

Zeolites - aluminosilicate porous structures used in catalysis for turning oil into petrol, or in detergents as water softeners - have been closely studied for years. But the details of how zeolites grow on the atomic scale remain a mystery, according to Anderson.

With his grant, from the engineering and physical sciences research council and Exxon, Anderson has gathered an international team of theoreticians and experimental chemists to work out how the channels that make up the pores grow, using atomic force microscopy, as well as NMR, high resolution electron microscopy and mass spectrometry. He plans to take that information and control the structure of zeolites as they grow.

Of the 150 or so zeolites known, most require expensive organic templates to create the pores. But the process by which the zeolite surfaces change cannot be controlled: ’People don’t understand how the crystals are growing,’ said Anderson.

’If you can really control how a zeolite grows, you might be able to make zeolites with left or right handed spirals. So you have a chiral catalyst,’ Anderson told Chemistry World. Made-to-order chiral catalysts would find use in the pharmaceuticals industry, he predicts.

Craig Williams, a zeolite expert from the University of Wolverhampton, UK, understands the desire to study zeolites at a fundamental, atomic level. ’Trying to understand how zeolites form has been the Holy Grail of zeolite research for 30 years,’ he said. ’The reason why this work is still funded is that if (and that’s a big if) we can solve this mystery then the world of nano engineering really does open up, with the possibility of nano wires and nano electronics or nano chemical reactors.’