The multifunctional chemical network has eight components. It is possible to control both the self-assembly of a three-component nanorotor and its catalytic action

Researchers from Germany have devised a molecular machine that goes beyond stand-alone molecular devices to deliver a system more closely resembling the complex networks in biological systems. 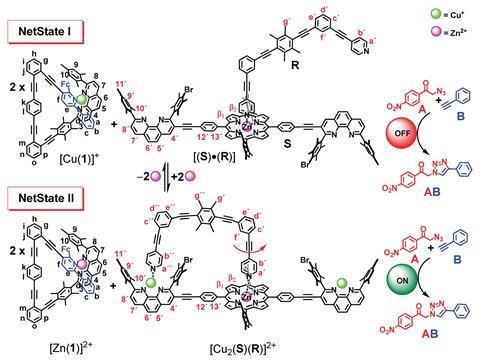 Adding/removing  zinc(II) ions commands nanoswitch 1 to transmit/receive copper(I) ions that serve as a second messenger. In the forward process, the copper(I) ions assemble a catalytically active three-component nanorotor from a weakly bound precursor complex, in the back process the disassembly leads to a catalytically inactive ensemble

Now, Michael Schmittel from the University of Siegen and his colleagues have successfully made a multifunctional nanomachine with perfect molecular communication between eight distinct components. ‘The time has come to soar above stand-alone molecular devices and to realise functions not in defined molecules but in complex networks, as ingeniously demonstrated in biological systems,’ he says.

Chemical signalling within the network controls the self-assembly and disassembly of a catalytically active three-component nanorotor by reversibly transmitting copper ions between two metal complexes. The system starts with a precursor complex weakly coordinated to one end of a ‘rotator’ molecule containing two pyridyl terminals, plus two identical nanoswitches loaded with complexed Cu(I) ions. Adding Zn(II) ions commands the nanoswitches to transmit the copper ions to the precursor complex, whereupon two copper ions become complexed within the two phenanthroline sites of the precursor molecule, becoming catalytically active in the process, and simultaneously completing the assembly of the nanomachine. The free-end of the ‘rotator’ molecule now weakly coordinates to the copper sites, becoming a spinning rotor as it exchanges between the two positions. Tests with a model click reaction confirmed that the copper ions could only catalyse the reaction once the nanorotor had assembled. Adding hexcyclen removed the Zn(II) ions from the nanoswitches, triggering the nanomachine to disassemble as the Cu(I) ions translocate back to their original coordination sites.

The main challenge faced by the group was setting up the highly selective translocation schemes and avoiding undesired interferences within such a complex mixture. ‘The larger the number of components, the more difficult interference-free communication is within the network,’ emphasises Schmittel. ‘In addition, we had to harmonise translocation time and the catalytic reaction rate. In that regard, we needed to optimise the substrates and solvent mixture.’

‘This work nicely illustrates how self-assembly enables the formation of intricate, yet well-defined, functional molecular systems,’ comments Matthieu Raynal, a supramolecular chemist from Sorbonne University in France. ‘Whilst it opens new avenues for the design of switchable catalysts, this strategy may ultimately lead to the development of interconnected catalysts for cascade reactions in a fashion that is reminiscent of the sequence of enzymatic steps operating in biosynthetic pathways.’

Looking ahead, Schmittel believes their next step will be developing autonomously operating networked systems that generate function in an out-of-equilibrium state.