Changing the face of a water splitting catalyst

Australian chemists  have  grown crystals of the water-splitting catalyst titanium dioxide that are many times more reactive than usual.

Anatase, one of the three crystal forms of titanium dioxide, can act as a photocatalyst that splits water into hydrogen and oxygen in the presence of sunlight. But harnessing this potentially abundant energy source still presents many challenges.

The new crystals - which are more than five times more effective at splitting water than unmodified anatase - were made by adjusting the crystal structure on the surface of the crystals. These surfaces, known as facets, typically form in the most thermally stable configuration, designated {101}, which contains mostly 6-coordinate titanium atoms.

However, an alternative surface configuration called {001} where most of the titanium atoms are only 5-coordinate, has been found to be far more reactive. ’The high percentage of "unsaturated" titanium atoms in {001} allows stronger interactions with adsorbed molecules, such as water, resulting in a surface that is many times more reactive,’ explains Max Lu, the leader of the team at the University of Queensland, Australia. 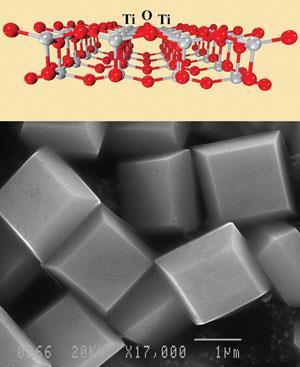 Synthesised crystals of anatase TiO2 with high proportion of {001} facets

The team used computer simulations to reveal that the formation of {001} facets could be directed using dilute hydroflouric acid, which terminates the growth of the crystal at the surface. This process, explains Lu, makes the {001} facet more thermodynamically favourable and allows it to form preferentially. After the crystals have formed, any residual fluorine can easily be removed by heating in an oven without affecting the crystal structure.

’This work demonstrates a beautiful combination of experimental investigation and theoretical calculation for design and fabrication of this important material,’ says Hua Chun Zeng, an expert on titanium dioxide crystal synthesis at the National University of Singapore.

Annabella Selloni and colleagues at Princeton University, New Jersey, agree. ’This opens new perspectives in the field of metal oxide synthesis and engineering, showing how computer simulations can help scientists in the development of new materials. It will be interesting to see how well these new crystals perform.’