Chatty nanoparticles signal to each other to attack tumours

Researchers in the US have shown how drugs can be directed to a tumour using two different nanoparticles that can talk to each other: one nanoparticle homes in on the tumour then loudly broadcasts its location to a second, drug-carrying particle that responds to the signal and accumulates at the target site. Early studies show that the system can result in 40 times more drug reaching the target than when non-communicating controls are used.

Conventional approaches to administering drugs typically involve swamping tissues with excessive amounts of drug to ensure that the target receives a therapeutic dose. Sangeeta Bhatia of the Massachusetts Institute of Technology and colleagues focused on how to generate a signal at the site of a tumour and then amplify it so that it can be easily received by a circulating drug carrier.

The researchers decided to use the blood’s coagulation response as the signal. Here, a small stimulus that results in damage to a blood vessel is massively amplified by a biochemical cascade into a huge response resulting in vast quantities of the protein fibrin being manufactured to repair the wound. 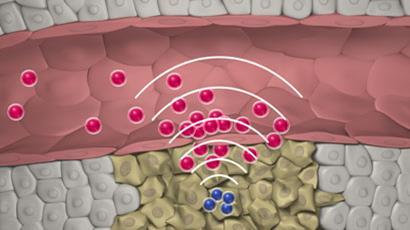 The team devised one nanoparticle system to enter the tumour and cause damage to the blood vessels, resulting in excessive production of fibrin. The presence of fibrin would act as the ’transmitting’ signal. A second nanoparticle circulating in the blood would then be tailored to seek out the fibrin, as a ’receiver’ of the signal.

The team developed two types of nanoparticle that preferentially accumulate in tumours: small gold nanorods and a protein that attaches to blood vessels in the tumour. Once in the tumour, the nanorods can be heated by infrared irradiation to cause damage and trigger the coagulation response. The protein-based nanoparticles spontaneously prompt fibrin release when they arrive at the tumour.

Two drug-carrying nanoparticles were used as ’receivers’, one consisting of dextrin-coated iron oxide nanocrystals, the other based upon a hollow lipid sphere called a lysosome. The first of these was fitted with a peptide that makes it stick to fibrin; the second with a peptide that interacts with an enzyme in the coagulation pathway, which ’staples’ it to the fibrin sheet.

Experimenting with mice, the research team observed that tumour uptake of drugs carried by the ’receiving’ nanoparticle was around 40 times greater than in the absence of the ’transmitting’ nanoparticle and six times more efficient than nanoparticles designed to target receptors on tumour blood vessels. ’These early demonstration systems show a substantial improvement in efficiency,’ says team member Geoffrey von Maltzahn.

Francesca Greco, who researches nanotechnological approaches to anti-cancer agents at the University of Reading, UK, says that the approach is ’ interesting and versatile, with potential applications both in tumour diagnostics, as well as in tumour treatment’. Greco adds that signal amplification is of particular importance, as early tumour detection is the key to improving overall prognosis.