US researchers have made metal-organic frameworks (MOFs) with ’rainbow barcodes’ built directly into their structure. By varying the amount of luminescent lanthanides in the framework, the novel MOFs are coded to emit a unique spectrum of light that can be read like a fingerprint.

It is hoped that these materials could find uses as invisible and harmless security tags to prevent theft or fraud, for example by integrating them into money, credit cards and parcels.

MOFs are porous materials made from metal ions or clusters joined together by organic linkers. Previously, they have found roles in gas capture and storage - but by taking advantage of their regular structure, St?phane Petoud and Nathaniel Rosi at the Universityof Pittsburghhave developed a new application.

’We have prepared MOF networks to incorporate two or more different near-infrared emitting lanthanides,’ Petoud told Chemistry World. ’Due to their electronic configurations, each of these lanthanides has a distinct spectroscopic signal that can be compared to a fluorescent fingerprint.’ 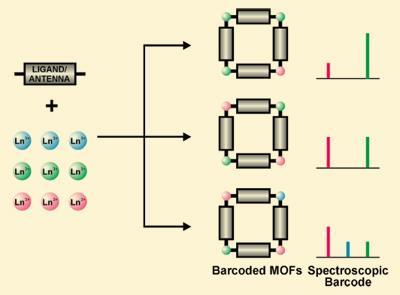 The team joined together ions of ytterbium, erbium and neodymium with a large conjugated organic linker called PVDC-1, which doubles as an antenna to boost the light emission signal. By varying the amounts of lanthanide salts used in the synthesis of the MOF, the framework can be tailored to emit a specific spectrum of light, rather like a coloured barcode.

The team are confident that the code can be expanded in future to contain at least six different lanthanides. ’If we group the lanthanides emitting in the visible and in the near-infrared, we will have a total of ten lanthanides to choose from, so there is really an endless variety of barcodes with different degrees of sophistication that we can target and fabricate,’ Petoud says. ’We are also considering the potential for biotechnological applications, such as labelling and tracking cells as they interact.’

’This is a neat idea,’ says Mark Allendorf, an expert on MOF design at Sandia National Laboratories in California, US. ’Practical uses do seem feasible, since the team could detect fluorescence even when the MOF was covered by a thin layer of superglue. Being able to encapsulate the material is important because the MOF may be water sensitive.’