In a step towards identifying the mysterious innate compass that many animals use to navigate the globe, chemists at the University of Oxford, UK, have shown for the first time that the Earth’s magnetic field can influence the outcome of a chemical reaction.

Many birds, mammals and reptiles have some form of ’chemical compass’ which depends on light from the sun, moon or stars to work. That has led scientists to suggest that a chemical reaction sensitive to light could be helping to guide the animals. But to date no reaction that responds to the Earth’s tiny 50 microTesla magnetic field has been found.

Now, a team led by Peter Hore and Christiane Timmel have shown that a large photoreceptive compound called CPF -   comprising carotenoid, porphyrin and fullerene groups linked together - is sensitive to these miniscule magnetic fields.

The molecule, which was made by Devens Gust and colleagues at Arizona State University, US, is unlikely to resemble the actual biological compass inside animals but does demonstrate how it might work. 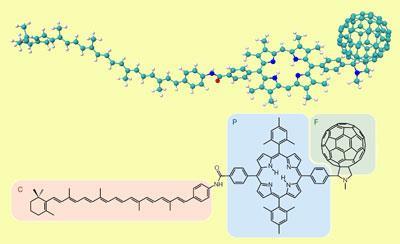 To make the chemical compass, the Oxford team suspended the CPF molecules in a liquid crystal and then froze them at -80?C. Next, the team applied a 50?T magnetic field from different directions. Unlike a typical compass needle, the molecules do not physically move to align themselves with the field. Instead, the photochemical reaction is affected and different yields of products form from the free radical intermediates in the reaction.

’When CPF absorbs light it forms an excited state that gives rise to a radical pair in the molecule,’ explains Peter Hore, lead author on the project. ’Crucially, these two radicals are located at either ends of the molecule - a distance of about 3.5nm - which is far enough apart to make them sensitive to a weak magnetic field.’

This means that the Earth’s magnetic field can cause one of the electrons to flip over, Hore says, making the spins parallel to one another and forming a ’triplet’ state. This state differs very subtly from the original ’singlet’ state: it cannot return immediately to the ground state and must go through an additional reaction step, causing it to be longer lived.

In animals, light-sensitive proteins - such as the cryptochromes found in the eyes of birds - could sense magnetic fields in a similar way, the team suggests. The presence of the Earth’s magnetic field would affect the yield of a specific radical state - which would in turn be picked up by signalling molecules and relayed to the brain.

’Experimentally this is a great piece of chemistry, but I don’t think it settles the debate on which process is responsible,’ says S?nke Johnsen, an expert on biological magnetoreception at Duke University, North Carolina, US. ’These experiments were carried out under conditions that are dramatically different to real biological systems, so there is still a long way to go before we can conclusively have an answer.’