Chemical conversion made twice as green

A combination of two green processes - supercritical fluids and photochemistry - could have a bright future for performing environmentally friendly reactions on an industrial scale, as demonstrated by new work by Martyn Poliakoff’s team at the University of Nottingham, UK.

Speaking at the 2nd EuCheMS Chemistry Congress in Turin, Italy, Poliakoff told chemists that if processes using supercritical fluid as a solvent could successfully be scaled up, they could provide cheaper, quicker and cleaner routes to many common chemicals. Photochemistry is also an attractive way to avoid using potentially harsh chemical reagents, so combining the two processes would be very effective. 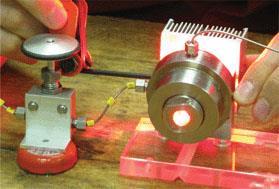 Poliakoff says his lab has recently designed a small prototype reactor capable of performing continuous photochemical reactions in supercritical CO2. To demonstrate the reactor, Poliakoff chose a reaction that combines alpha-terpinene with singlet oxygen to give ascaridole - a monoterpene with an unusual bridging peroxide group. At around 140 bar of pressure - where  CO2 gas to a supercritical liquid - the resulting fluid is miscible with gaseous O2, allowing the reaction to proceed faster than in a conventional solvent.

Such reactions would traditionally have been performed in carbon tetrachloride - a solvent now restricted in many areas due to its ozone-depleting effects. Supercritical CO2 offers many advantages as a solvent, being non-toxic, non-flammable, and simple to remove at the end of the reaction because by releasing the pressure it returns to the gas phase.

’Since carbon tetrachloride can no longer be used in these types of reactions in industry, solvents like this may be a promising, and green, way forwards,’ said Poliakoff, who was awarded the EuCheMS Lectureship 2008 and spoke after the opening ceremony.

To show the potential for scaling the method up, Poliakoff’s team designed a small-scale continuous reactor that can pump out ascaridole at approximately 0.2g per minute with 100 per cent yield. Although using high pressure can be costly, Poliakoff believes that the increased efficiency of the reagents and savings in reagents used would far outweigh the potential costs of running larger scale reactors.

Sergei Egorov, an expert on supercritical fluids at the University of Virginia, US, is interested by the work, but notes that Poliakoff will be prevented from performing photochemical reactions at a specific range of temperatures and pressures around the critical point of CO2. This is where a phenomenon called supercritical opalescence occurs, which turns the liquid cloudy. ’Even so, reactions like this have great potential in industry,’ Egorov told Chemistry World, ’as long as you can balance the extra costs of dealing with high pressure with the gains in efficiency.’