Researchers in the US have developed a novel way to detect damage on DNA. The finding could open the way to a new toolkit of molecular probes to investigate the impact of chemical modifications on DNA, potentially providing insights into the way that mutations in DNA can result in cancers. 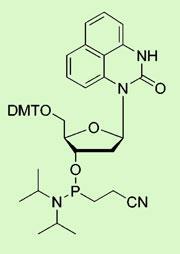 Carcinogenic chemicals often work by alkylating DNA, adding water-hating carbon chains to the double helix. Bulky adducts can persist and escape repair, resulting in mutation and ultimately cancer. To understand precisely the chemical mechanisms of carcinogenesis for specific agents, it is important to be able to correlate the chemical structure of an adduct, and the extent of its distribution in DNA, with the toxicity of a given carcinogen.

At the University of Minnesota, Jiachang Gong and Shana Sturla have now developed the first example of a synthetic nucleoside - a DNA base linked to a sugar molecule - that   can home in on a specific bulky DNA adduct called O6-benzyldeoxyguanosine, which results naturally from exposure to environmental carcinogens and is highly mutagenic.

The researchers used molecular modelling to predict that a diaminonaphthyl-derived nucleoside would form complementary hydrogen bonds to the adduc, sticking the two units together. They synthesised the nucleoside and found that it did indeed form a stable bond with the adduct. It could also distinguish between the carcinogenic adduct and similar structures formed at other positions along the DNA molecules.

’This is the first report of a stable DNA base pair comprised of a biologically relevant bulky DNA adduct and a designed nucleoside partner,’ the researchers report.

Sturla told Chemistry World that it could be possible to develop a suite of probes to study DNA alkylation resulting from specific environmental pollutants, as well as anticancer agents, some of which also work by alkylating DNA. ’But to do this effectively we think it will be important to understand in detail the physical forces that govern the stability of any adduct-probe pair,’ Sturla said.

Henry Scowcroft of Cancer Research UK welcomed the findings. ’Research like this adds to the scientist’s armoury in the quest to beat cancer,’ Scowcroft told Chemistry World.   ’Finding out exactly how our environment interacts with our DNA to cause mutations is obviously hugely important. Although this research took place far from an oncology ward, tools like this could lead to a better understanding of carcinogenesis, and potentially new preventative strategies, new drugs, and better patient care.’